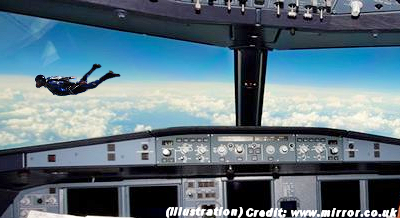 Pilots were left stunned when they saw a “flying man” zoom past the side of a plane at 3,500ft above the Cheshire countryside.

Â  Â  Â Pilots on a passenger plane were stunned when a â€œflying manâ€ zipped past the side of their aircraft at 3,500ft.

Aviation experts admitted they were baffled by the sighting of the human UFO, who has been dubbed Superman of Macclesfield.

He appeared from nowhere as the Airbus 320 passed the Cheshire town while it was coming in to land at Manchester Airport.

The pilot and first officer, who reported the sighting to air traffic control, thought the man was a paraglider but could not see a canopy.

And the mystery deepened when there was no sign of him on radar. . . .