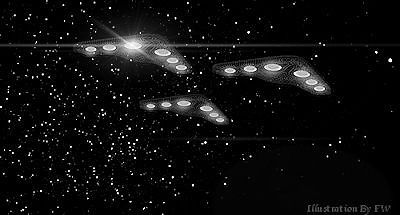 The incident occurred at 10 p.m. on October 12, 2014, at the coal plant along Winifrede Hollow Road.

â€œThe plant was down and there was no noises anywhere,â€ the reporting witness stated. â€œMe and nine other guys had just finished doing pipe repair and were standing outside leaning against trucks. One of the guys pointed up and said, â€˜What is that?â€™â€

The group of workers looked up to see the first object.

â€œWe all looked up and saw a triangle-shaped object outlined in white lights the size of a football field coming up the hollow from the southwest [Beckley, WV area]. It might have been 300 to 500 feet above us. It was moving very slow and made no noise. We watched for about 3 or 4 minutes as it disappeared over the trees.â€

Then a smaller fourth object was seen.

â€œAfter these three went by a small object with lots of red flashing appeared at the end of the line formation. They were all headed northwest towards Charleston, WV.â€

The witnesses were amazed that there was no sound.

â€œWhat was strange about the objects was that there was no noises whatsoever â€“ to be as close as they were, and their sizes. All of this took place in 15 minutes.â€ . . .