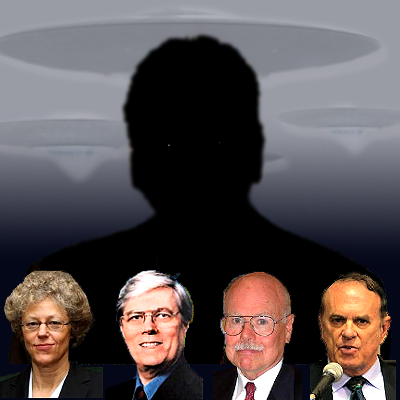 â€œIâ€™ve had to cancel my participation in this event because of another assignment,â€ the PBS science correspondent and former CNN anchor stated in an email to De Void. â€œI have no problem addressing this issue and have done so publicly in the past. And I intend to in the future. Iâ€™m just too busy right now.â€

John Weiskopf, the AU film professor whoâ€™s sponsoring the panel discussion, hasnâ€™t settled on a replacement, but â€œwe are working on it,â€ he writes. â€œIt will be somebody good.â€

If only. You’d stand a better chance of starting a turtle feather collection than of booking a blue-chip mainstream journalist who knows beans about The Great Taboo. About the only sure-fire things that pass for UFO coverage these days are breezy little blurbs about ambiguous images in the night sky. Hereâ€™s the latest and, swear to god, when I first read about this one it sounded so familiar I thought they were flogging the same dead horse from August.

A smudgy image appeared off the ISS during a spacewalk on Oct. 7, as two astronauts attempted to recover a kaput cooling pump. When the sequence was uploaded to YouTube last week, the â€œalien spacecraftâ€ speculation began, predictable as flies on slop. There were diverse culprits like the San Jose Mercury News, which did zero digging but managed to post a quickie, headlined â€œVideo: Did a UFO photobomb a NASA space video?â€ Ultimately, given the UFOâ€™s perfect synchronization with the ISS movements, sources quoted by the UK tabloid Daily Mail (the only outlet to bother with picking up a phone) attributed the mystery to either lens flare or a camera artifact.

Missing from this mix, of course, was any feedback at all from NASA, which failed to reply to The Mailâ€™s queries. The space agency, which has traditionally done a lousy job of promoting its assets, also declined comment on a carbon-copy incident back in August. They have their reasons. NASA could probably staff an entire UFO hotline desk to explain lens flare and camera artifacts and it still wouldnâ€™t make any difference. People will see what they want to see.

Still, thereâ€™s a vacuum here, and itâ€™s the reason we need informed, persistent, and open-minded reporting â€” not doctrinaire pseudo-skepticism â€” to run interference. Despite the mindless clutter, weird things do happen, in space and closer to the ground. Finding journalists smart and inquisitive enough to know the difference is a virtual foolâ€™s errand these days. Good luck, John Weiskopf.