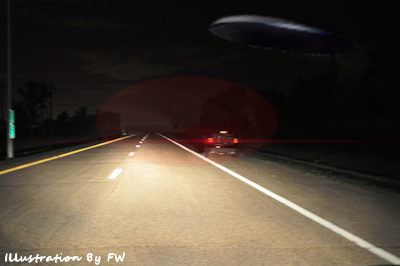 Â  Â Â  At dusk on Tuesday evening, Oct. 7, Chad (he requested that only his first name be used) was northbound on Missouri 13 and had reached a point just north of Osceola when he became aware of two things simultaneously: There was a car pulled off on the shoulder with its flashers on, and a large dark bulk hanging motionless in the air that appeared to be almost directly above it less than 100 feet above the ground. As he drove up on the scene he became aware that he was looking at an aircraft of some kind.

â€œIt wasnâ€™t like anything I had ever seen before,â€ he told me during a telephone interview less than a week later. â€œIt was sort of a flattened-out oval that was more rounded on top and flatter on the bottom. I would guess that it was about 100 feet long, maybe 35 to 40 feet wide, and 15 feet tall at its thickest point. It was parallel with the highway and maybe 50 feet or so off on the right side, which would be east. It was dark gray in color and had no markings or windows that I could see. There was a man and a woman in the car staring up at it through the windshield, and they didnâ€™t even glance over at me as I drove by. I was probably down to 10 or 15 miles per hour at that point.â€ . . .