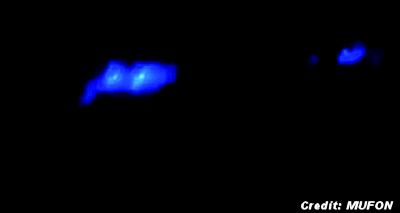 â€œI was prompted to notice a small, glowing, weird rod-shaped object hovering approximately 30 feet above the ground in the flimsy, leafy, outer branches of a large tree behind a house in my tranquil, heavily-wooded suburban neighborhood of Stratford Hills in Richmond, Virginia,â€ the witness stated.

The area is part of the witnessesâ€™ regular walking route.

â€œIâ€™m 54 years old and Iâ€™ve been walking this route nearly every day for 10 years and what I beheld at 11:33 p.m. on a very quiet Sunday night was abnormal and totally out-of-place! Most of my neighbors probably were in bed.â€

Something odd caught the witnessesâ€™ attention.

â€œI was fortunate to view the mysterious glowing object that seemed to be hiding up in the tree and I partially attribute my good fortune to the fact that it was a new moon â€“ the darkest night of the month!â€

The witness described the object

â€œThe silent UFO first was rod-shaped with a glowing blue light on the left end and a pinkish-violet light on the right end. It was hovering horizontally in a place where a human could not be. It was not a new-fangled bug zapper and there are no cable-TV or electric lines running near the tree and definitely not at that height. No logic for the uncanny faintly-glowing lights in the tree.â€

The witness used an iPhone 4S with no zoom to shoot video of the object and then switched to shooting still images in order to zoom in. Thirty images were shot over a 10-minute period. . . .