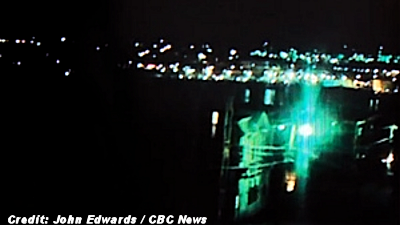 Â  Â  Â  A Saint John man says he’s still shaken by the mysterious object he saw flying over the city and near the Irving Oil Ltd. refinery last week.

John Edwards says his heart was pounding as he and his girlfriend watched the bright object from his uptown apartment window on Oct. 20, at about 10:30 p.m.

“It was terrifying. I was hiding behind the curtain,” said Edwards, who captured the unidentified flying object on video using his iPhone.

“I almost felt like whatever it was knew I was watching with my camera,” he said. “It was really a weird creepy feeling. but it circled around at that point and came all the way back and went across the street basically and watched us through the window.”

CBC News put in calls to the City of Saint John, the Saint John Airport and the Saint John Police Force, asking if anyone knew what the UFO was or who was responsible, but as of Thursday afternoon, had not gotten any answers.

25 Years of UFO Sightings in Canada