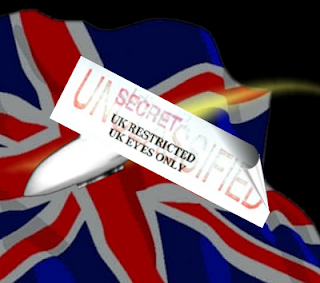 Ministry of Defence, Britain: You Can’t Have It Both Ways
Part II
Hide and Seek

Â  Â  Â  Statements by Defence and Intelligence officials, such as the little gem above, could (at a stretch) be taken with a grain of salt, if: 1.) they were not so common, and 2.) if it were not for the fact that they are so well supported by the contents of once classified government files and findings.

In my last blog post I discussed the fact that Britain’s MoD had, in August this year, “discovered” another eighteen UFO-related files hitherto unknown to anyone outside the Royal Air Force or Defence Intelligence Staff. This, despite assuring the public in 2013 that the “entirety” of Britain’s military and intelligence community UFO files had been examined and released. Of course, only through pressure from researcher Andy Russell did this enlightenment come fourth; the MoD were certainly not going to admit anything untoward on their own. This constant game of UFO-file-hide-and-seek has gone on in Britain and the USA for so long now that it is certainly the rule, not the exception.

So, the eighteen new files themselves are nine months away (if there is none of the usual shenanigans) from being made public, albeit with what I suspect will be a great deal of redaction. But what can we postulate is contained within them in the here-and-now? I have had a close look at the filing codes and file titles of these eighteen files and some of them are quite interesting indeed. The list itself:

The first thing that stands out here is that the file titles are unlike almost any of the previously released S4 (Air), S6 (Air), DS8 and AS 2a Air Staff files, which have titles like “DEFE-24-2019-1”. Five of the files contain the “DI55” which means the creating agency was the ultra-secretive DI55 unit, one of about 80 small cells within Defence Science and Technical Intelligence (DSTI), one of the larger branches of the Defence Intelligence Staff. Most readers will know that DI55, of course, has been found to be very much active in the collecting, collating and investigation of UFO reports and other materials (radar imaging, statistical data, etc) for decades, despite blunt denials throughout the 1980’s. So one shouldn’t be surprised that their little posse has been outed.. again.

Being more specific, what actually “jumped out” in these eighteen new files, however, was the term “ADGE”, with the term “UFO REPORTS” coming straight after. Air Defence Ground Environment (ADGE) is a top echelon term used to describe, in a round about way, the physical and, to a lesser extent, non-physical make-up of an entire “Air Defence Region” (ADR) or regional “Recognized Air Picture” (RAP). Sometimes called a “system of systems” ADGE can be considered an integrated and multi-layered web of ground-based long range radar networks, coupled with airborne early warning systems and even civilian Air Traffic Control networks. The term is most commonly used in the written doctrine of NATO (North Atlantic Treaty Organisation) operations and directives. One cannot be forgiven for pondering the possibility that these files, which, lets face it, contain the terms “ADGE” and “UFO Reports” in the same title, contain cases where UFO events have seemingly come up in the UK’s Air Defence Region (UKADR), or, maybe, have occurred across Europe and somehow involved the MoD. I may be wrong of course, but lets not forget 1989 and 1990 when Belgium’s Air Force infamously scrambled pairs of F-16A’s combat aircraft, on three occasions no less, to chase down and visually identify extraordinary unknown intruders which appeared first on the huge NATO ADGE radar network on the ground, then on the vertical scan radar displays of the F-16A’s as they we vectored in to the targets by nervous Belgium Combat Operations officers on the ground. As we all know, three weeks later Belgium’s Air Force admitted in a press conference (headed by Major General Wilfried De Brouwer himself) that the unknown(s) ran rings around the F16’s, and the rest is history.

The next thing that jumps out in the file titling of these eighteen new finds is the term “ISTAR”. The actual file title is “2GP(BP)/88772/10/ISTAR UFO REPORTS”. “ISTAR” stands for “Intelligence, Surveillance, Target Acquisition and Reconnaissance” and is a war-fighting and wide-area battle-management concept that oversees, if you like, the linking of real-time intelligence (signals intelligence, telemetry data, etc) with overhead surveillance and reconnaissance, to produce a usable battle picture for war-fighters in the far flung operations arena. Once again, once must wonder why the term “ISTAR” and “UFO REPORTS” come up in the same title. Another file, “M9/18 Defence Policy Issues UFOs”, hints to me that hitherto unacknowledged opinions or concepts (relating solely to the UFO matter) were laid out by intelligence of defence staff of an equally hitherto unacknowledged agency within the MoD, namely “M9” or “M9/18”. A simple internet search is yet to yield results, but my bet would be that this agency, if the file title is indeed referring to an agency, is a long-gone, absorbed, merged or cannibalized cell formally operating at one of the usual old MoD UFO suspects: the DIS floors of the Metropole Building in London, or RAF Provost Marshall or RAF Special Investigation Branch at Rudlow Manor.

Whatever the contents of these files, the same tired old story is playing out again. Our continuing to have to play this game of hide-and-seek insults the intelligence of UFO researchers and government officials alike, whether they be military, intelligence, agency, or otherwise. In regards to the MoD specifically, I often go back to an extraordinary admission contained within the MoDâ€™s Defence Intelligence Staffâ€™s â€œProject Condignâ€, or, for the proper title, â€œUnidentified Aerial Phenomena in the UK Air Defence Region, Scientific & Technical Memorandum – No. 55/2/00â€. Released, albeit with the usual redactions, on May 15th, 2006, the publication, compiled in 2000 and originally classified SECRET UK EYES ONLY, states, as many of you will know, on page four of the Executive Summary:

“The phenomenon presents itself as having exceptional capabilities. That unidentified aerial phenomenon exists is indisputable. It is credited with the ability to hover, land, take off, accelerate to exceptional velocities and vanish. They can reportedly alter their direction of flight suddenly and clearly, characteristics well beyond those of any known aircraft or missile, either manned or unmanned.” 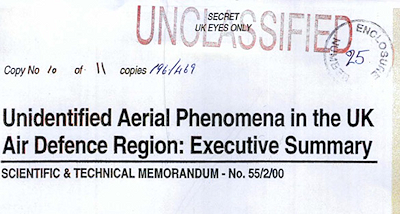 Project Condign was, of course, commissioned and conducted by DI55, DIS in great secrecy. After decades of MoD denials and downplaying, one is right to ask why the decision was made to commission and conduct a study into UFOâ€™s â€“ or, as Condign terms them, â€œUAPâ€ or â€œUnidentified Aerial Phenomenaâ€, at such a late stage? And, if there was nothing to hide, why the great sensitivity? Indeed, the MoD insisted, on a number of occasions, both in Parliamentary Answers and statements issued to the media, that they had never, and were not, carried out, or were carrying out, any detail examination of the issue. One wonders just how much more UFO material is kept under lock-and-key within the MoDâ€™s vast structuring. For example, we know that the Royal Navy (RN) has managed to keep a stunningly tight lid on their UFO files, once held with Admiralty Board no less, before being compartmented deeper still in the late 1980â€™s. Then there was the discovery of UFO investigation conducted at the RAFâ€™s Low Flying Complaints Department in the 1970â€™s and beyond. Even Ralph Noyes, former Head of Defence Secretariat 8, MoD, who was supposed to be aware of all UFO investigative capacity within the UKâ€™s military and intelligence community during his tour of duty, was astonished to find he was not being kept in the loop with regards to the big picture. One wonders, after the latest files are released, will the MoD once again claim that they have truly declassified all their UFO material? Or will we play another few games of hide-and-seek?