NECOCHEA â€“January 2000:Â The city of Necochea on Argentinaâ€™s Atlantic seaboard found its hotels crammed with thousands of foreign tourists who come to enjoy the long beaches known as the â€œsoft slopeâ€ which run in excess of 300 meters from the sea to Avenida 2 (Costanera), their fine sand and the purity of its waters, refreshed by constant waves. This is one of the factors which among others ( their width, which makes them unique in Argentina) and Parque Miguel Lillo, covering over 700 hectares and including a million trees, largely pines and firs which provided shelter to the birds living in the area, have aided in keeping temperatures in excess of 30 degrees every day during the month, making Necochea beach a safe and enchanting place for tourists.

Once again, the UFO phenomenon did not delay its appearance. 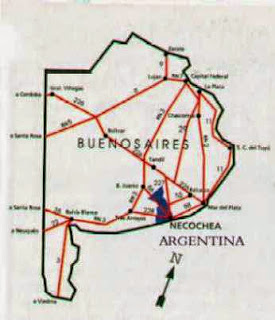 On January 20th, a wedding feast was held in the ballrooms of the Complejo Nuevo Casino, located on the shore at Avenida 2. The young couple of Maria Paola Murua and Sergio Marcos had married at said location.

After nightfall, while enjoying their wedding dinner, the couple decided to go to the beach in front of the Casino to take video shots of the festivities among the newlyweds and their gests. While standing at the beach belonging to the AutomÃ³vil Club Argentino (A.C.A.) at 02.00 hours in the morning (21 January), the guests saw a luminous whitish blue object crossing the skies along the coast. Visibility was good, and the skies were clear and starry with only a few clouds.

The objectâ€™s transit lasted less than 40 seconds and was completely silent (at least no sound could be heard in the distance).

One of the female guests noticed the phenomenon and informed profesional cameraman Roberto Nebot, who was shooting the wedding video, and managed to record the objectâ€™s transit on a Panasonic 9500 Zoom x 12 / GAIN + 7 camera.

Not all of the guests paid much attention to the event, and even others chose to ignore it. Even the cameraman himself only recorded a few seconds before returning to the wedding celebration.

Incidents on the Atlantic Coast: UFO Sightings at Necochea and QuequÃ©n

– FILMING OF A UFO AT NECOCHEA

– INCIDENTS HAVING SIMILAR CHARACTERISTICS IN THE SAME AREA

Some of the witnessesâ€™ names remain anonymous at the request of the parties involvedâ€”however, all of the information has been recorded as part of my research.

The images in question show the antics of all the wedding guests on the beach as well as the presence of the UFO being detected by a female guest. The UFO can be clearly seen in the darkness of the coast, flying at low speed and at a great distance toward the south before vanishing in the clouds (according to the main eyewitness).

The UFO is very bright and at times varies its whitish-blue intensity (or as it passes through the clouds).

The film with the images obtained of the object is currently in my files and forms part of a new sighting supported by video evidence, substantiating the local case histories. 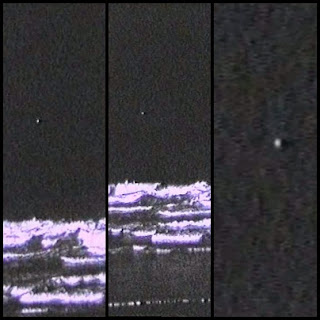 Digitized images of the UFO film obtained on January 21 2000 at 02.00 hours on the Necochea coastline and taken by professional cameraman Roberto Nebot.

FISHING BOATS STARTLED BY THE APPROACH OF A UFO

Another incident also took place in mid-Januray 2000 on the Necochea coast.

The witnesses in this case were several fishing boats commonly knowh as the â€œYellow boats.â€

The fishing vessels known as â€œyellow boatsâ€ at the port of Quequen-Necochea (Argentina), witnesses to several UFO incidents..

In early hours of the morning, at approximately 02:30 or 03:00 a.m. and under complete darkness, the fishermenâ€”a total of sevenâ€”observed a white light approaching their vessels and headed for the Necochea coastline.

At first they all thought it was a helicopter, but were surprised by its strange, completely silent movement, as well as its reasons for such behavior. Furthermore, there are no helicopters patrolling the coast so early in the morning.

Their astonishment was undescribable as they realized that what they were seeing was a large vesse, similar to two soup plates, which placed itself above the fishing boats, emitting a great beam of white light which â€œlit the night as though it were day.â€

The fishermen radioed other vessels in the area; the crews of these other ships also became witnesses of the phenomenon (amounting to a total of over 40 fishermen).