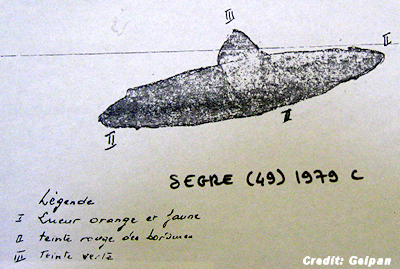 Why the French state has a team of UFO hunters

“France is the only country in Europe to maintain a full-time state-run UFO (unidentified flying objects) department.”

Â  Â  Â Thousands of UFO sightings are reported every year but not many countries are willing to spend money investigating them – there is just one dedicated state-run team left in Europe. Is France onto something? . . .

An offshoot of all that – France is the only country in Europe to maintain a full-time state-run UFO (unidentified flying objects) department. There used to be one in the UK and another in Denmark but they closed down years ago due to budget cuts.

France’s UFO unit consists of four staff, and about a dozen volunteers who get their expenses paid to go on site and look into reports of strange sightings in the skies.

The team is called Geipan. That’s a French acronym for Study Group and Information on Non-Identified Aerospace Phenomenon. . . .

Half of French UFOs Remain Unexplained