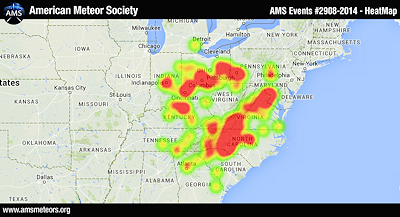 Â  Â Â The American Meteor Society has received over 200 reports of a bright fireball on Monday evening, November 3, 2014. It was observed over a large portion of the eastern USA stretching from Georgia northward to Ohio. This event occurred near 6:23pm eastern standard time or 23:23 Universal Time. While processing these reports the feature that was most mentioned was the vivid green color mentioned by many witnesses. Individual reports may be seen at: Report #2908 for 2014. . . .