The phenomenon itself inspired fear, according to one of the eyewitness, especially the UFOâ€™s approach and the firing of the beam of light. The object remained present for some minutes before vanishing, moving away in the darkness of the night across the sea.

Regrettably, the names of the eyewitnesses and other accounts remain undisclosed, since they would rather not tell their stories out of fear for the ridicule they might experience in the court of public opinion. (This is due to the fact that they have already â€œsufferedâ€ similar reactions in other experiences theyâ€™ve had).

If you missed PART I of this series click here!

This story reached me directly from other co-workers in the fishing business, attesting to the truthfulness of the events. The witnesses are highly reliable and credible people.

The witnesses added that it was common the unidentified aerial phenomena in this region of Necochea and Quequen, not only flying along the shore or over the city, but emerging or plunging into the ocean.

Several other cases similar to this one can be shown for comparative purposes.

For example, we can also cite the case which took place in Necochea on 11 July 1968 when four persons driving along the coast saw a UFO at 01:05 hours. The startled onlookers noticed that the object was 800 meters inland from the shore.

The event immediately gave rise to remarks among the startled youngster while they object could be seen from an Argentinean merchant marine vessel.

The UFO was apparently stationed at some 100 meters altitude; it had an ovoidal shape and was extremely bright, resembling â€œa fireballâ€, according to one of the witnesses.

It appeared suddenly over the Atlantic, moved swiftly and made a sudden stop while issuing a beam of light which covered a radius of approximately 50 meters.

The strange object disappeared shortly afterwards, as mysteriously as it had first appeared. But witnesses were able to see that prior to setting in motion, the beam of light was â€œswallowedâ€ back into the UFO, rising into the object.

The next morning, a press conference was held at the Prefecture of the Port of QuequÃ©n-Necochea. The speaker was the captain of the domestic registry vessel â€œRio Grande, Jorge Alberto BÃ³veda, 24, accompanied by radiotelegraph operator Manuel Jorge Fotini and helmsman Manuel Silva do Santos.

During the event, a report was given as to the presence and detection of the UFO along with certain observations made from the ship.

The sailors said that â€œits color was hard to describe. It had orange tinges, and appeared to be coming for the ship but suddenly stopped and began to issue a powerful beam of light toward the water, which acquired a hue similar to mercury”.

They admitted having felt fear due to the UFOâ€™s presence and the fact that it was almost soundless duiring the minute it was almost directly over the vessel.

The news agencies gave the case national coverage, reporting that an Argentinean merchantman waiting to enter Port Quequen and less than 1 kilometer from the bulkhead limit had seen a UFO at 174 degrees, between 3 and 5 degrees of the city of Necochea.

CapitÃ¡n BÃ³veda stated: “that no electrical or magnetic alterations or desiturbances were recorded while the object remained present near the ship.â€

It is worth noting that the account given by the four Necocheans who saw the object from land coincided perfectly with the details given by the sailors.

It should be noted that on the morning of Wednesday, July 10, several residents of Quequen startled public opinion by claiming to have witnessed the maneuvers of a UFO over their city. This case was widely circulated in the local newspaper, which included the eyewitnessesâ€™ accounts.

At this point we must make clear that the January 21, 2000 event involving the sighting of a UFO during a wedding, aside from the one involving the fishing crews of the â€œyellow boats ” received no publicity whatsoever, remaining unknown -until now- by the public at large and the written/televised media, since the parties involved preferred not to comment on the event. It was only a few days later that I received knowledge of these events, and that gave rise to my research.

This is the first time that any information has been released regarding these two significant UFO events.

INCIDENT AT THE BEACHES OF QUEQUEN

“One doesnâ€™t lie about this kind of thing. You say what you saw and thatâ€™s it.â€ This was the opinion of Mr. Orlando Ostrobski, 69, who witnessed the transit of a silent object on Wednesday, March 1, 2000 over the city of QuequÃ©n, Buenos Aires Province (Argentina) . 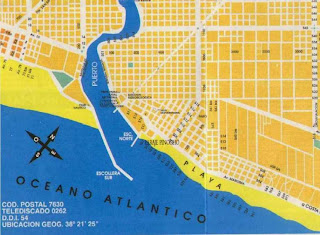 Drawing which shows parts of the coast of Necochea and QuequÃ©n (Argentina) along the QuequÃ©n Grande river. The Pinocho bathing facility and its environs have been the scene of constant UFO activity.

“To me, it was a UFO,” says Ostrobski, a custodian at the Pinocho Bathing Facility at QuequÃ©n, one of Necocheaâ€™s neighboring cities. At around 21:15 hours he saw an oval-shaped object â€œsumounted by a dome and with a blue colored light.â€

“It was no hallucinationâ€”I saw it very clearly.” The witness tells us he was on the buildingâ€™s deck at 502 Street, from which the two reefs of Puerto QuequÃ©n can be clearly seen.

“I was somewhat startled, because I could see this light coming”. He pointed out that while he had seen UFOs earlier, he had never seen anything similar so close.

The object was moving from the South (coast of Necochea) toward the north some 120 to 150 meters in the air, approximately, at an estimated speed of 50 kilometers an hour.

On Wednesday, Orlando Ostrobski and his wife were watching TV at their home located at the rear of the Pinocho building, located at 1355 Calle 502, facing the shore. This is a heavily visited tourist area in the summertime and a very good location for surfing events. This is the place where large numbers of young people gather to engage in such marine activities, as they do in Necocheaâ€”the only two places in Argentina that attract surfers due to the quality of their waves. The mos perfect â€œcurlsâ€ in the country can be found here.