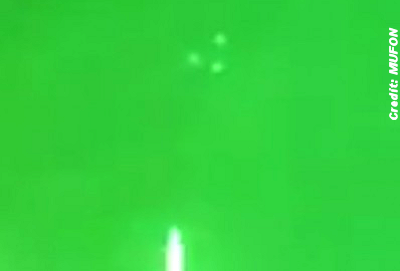 Â  Â  Â . . . â€œSomewhere about 30 minutes into the session I saw a triangle craft appear from the north on a southerly trajectory. It was emitting light from each of its three corners (as youâ€™ll see in the attached video â€˜auburn hillsâ€™). Its altitude seemed to be at least several thousand feet. I called out that I saw an inbound triangle and the guy next to me tried frantically to see what I was talking about. He didnâ€™t have any light enhancing devices and never ended up seeing the craft.â€

The group remained in the field until 9:15 p.m. when the cold sent them home.

â€œThe next day, Monday, November 3, 2014, I went through the recordings to show the craft to the others who didnâ€™t see it.â€

But once the entire video was reviewed, more objects were seen. . . .