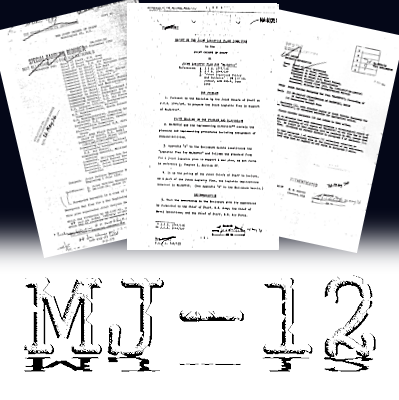 Â  Â  Â  A document labeled with the Majestic tag has been found. It has a proper provenance, which means the origin of the document can be traced by anyone who wishes to do so and there is no doubt it is authentic.

There are some interesting things on that page. It identifies the problem, saying, â€œ1. Pursuant to the decision by the Joint Chiefs of Staff on J.C.S. 1844/126, to prepare the Joint Logistic Plan in support of MAJESTIC*.â€

The asterisk references the same document mentioned in the body of the text. It provides no more information about it, but it is interesting because it is a reference to another document which could be traced to provide additional authentication. It also suggests something about how these highly classified documents are created and how many of them are inter-related.

The rest of the document is merely other paragraphs that tell us very little about what Majestic is and everything that it does say could, in fact, be considered as evidence of MJ-12. This is a document that deals with logistics, which can be simply defined as the support needed for military operations. It could be said that this is a document that relates to the movement of an alien craft, the wreckage or debris, and the bodies of the alien flight crew from one location to another. This would be the plan to explain the mode of transportation, how many soldiers would be needed, how they would be fed and housed, the fuel supplies, weapons and ammunition, route information and bases where additional support could be found and anything else rated to all of this.

The second page is a list of those who will receive the information which is quite long. It is labeled, â€œTop Secret Security Information,â€ and is stamped, â€œSpecial Handling Required, Not Releasable to Foreign Nationals,â€ and for those keeping score at home is dated 25 September 1952. Please notice the dating format that is not 25 September, 1952.

But here is where we run into the first problem with all of this. At the bottom it is noted, â€œForward herewith is a copy of the Joint Outline Emergency War Plan for a War Beginning 1 July 1952 MAJESTIC. This plan supersedes Joint Outline Emergency War Plan MASTHEAD, which was forwarded by SM-1197-51, dated 14 May 1951, copies of it will be either returned or destroyed by burning.â€

This suggests that it has nothing to do with UFOs or the Majestic-12, but the argument could be made that this is â€œtypical boilerplate,â€ meaning that the paragraph is sort of standard without a specific meaning other than instructions of removing the obsolete plan and replacing it with the new one. In todayâ€™s world it would be a â€œcut and pasteâ€ error. In 1952, such a thing is more difficult to explain.

The third page makes it clear what is being discussed and what Majestic really is and ends all our speculation. Stamped with a date of 2 OCT 1952 (as opposed to 02 OCT, 1952) and with â€œTop Secret Security Information, the letter, in paragraph one said, â€œEnclosure (1), with attached copies of Joint Outline Emergency War Plan â€œMAJESTICâ€™, is forwarded.â€ This is a war plan and has nothing to do with UFOs. The markings on it, made in 1952, show what they should have been as opposed to what they are on the MJ-12 documents and the EBD. Yes, there might be variations depending on military service branch and the level of classification, but here is something that shows what was being used at the time, how it was used and what the specific wording was and should have been. This does not bode well for MJ-12, not to mention the duplication of code words.

This is the same argument made for Majic. During WW II there was a highly classified project known as Magic. This similarity could lead to compromise, if you had two projects with such similar names.

The last page of the documents that I have makes it clear that there is no reason to assume this has anything to do with the investigation of alien craft, alien bodies or the recovery of an alien spacecraft. Paragraph 4 says, â€œThe estimate of the Soviet Unionâ€™s capability to execute campaigns and her probable courses of action contained in the Enclosure does not take into consideration the effect of opposition by any forces now in position or operational, or of unfavorable weather or climate conditions.â€

This is also classified as â€œTop Secret Security Information,â€ and is dated 12 September 1952 (again is relevant because it puts it into the time frame of the EBD and it shows the dating format as it should have been written), is signed by W. G. Lalor, Rear Admiral, U.S. Navy (Ret.), and is also noted as â€œReproduced at the National Archives.â€

This then, should be the absolute, final blow to the MJ-12 nonsense. There simply wouldnâ€™t be two highly classified projects with the same code name operating at the same time and we have the documentation here to prove that Majestic existed but it wasnâ€™t what we have been told.

It should be noted that I was alerted to this by my colleague Tony Bragalia. He suggested that this might have inspired the name Majestic-12 because here was a real project with that name. If the documents were still classified, meaning they couldnâ€™t be released into the public arena, and in the 1980s, the classification might have held it would have been an interesting bit of corroboration. Someone could have stumbled over the top secret project with the name being found but nothing to identify exactly what it was. This would have hinted at a provenance and a high classification. Without some of the follow up documents, there could be speculation about what it meant, but no one would know. It would have provided an interesting timeâ€¦ until all the documents were found. Too bad that those proponents of MJ-12 couldnâ€™t have found some of this twenty years ago. Oh, weâ€™d know now what it was all about, but it sure would have given them a fine run.

And I have to wonder if Bill Cooper, in his claim to have seen documents labeled as Majestic might not have seen these documents. Given his claimed position in the Navy, he might have seen the cover sheets for this but had no chance to read the document to see what it was all about.

Tony added a note about all this, and how he came to find the documents. He provided the link so that those who wished to see the provenance would know where to look. He wrote that, â€œThe reference linked below is what got me going down this research avenue. The Emergency War Plan -codenamed MAJESTIC – is highlighted in yellow in the military history book seen here: books.google.com

Added to the failure of the El Indio – Guerrero UFO crash that is part of the EBD and for which there is no evidence of it other than Robert Willinghamâ€™s obviously bogus tale, this should end, for all time any doubt about the fraudulent nature of the original MJ-12 documents. And for those who would now retreat to the argument that â€œAbsence of evidence isnâ€™t evidence of absence,â€ I would say, until you find something tangible, â€œAbsence of evidence is, in fact, evidence of absence.â€ I have looked, others have looked everywhere that something like this would be noted, and nothing has been found.

This seems to be â€œGame Over.â€