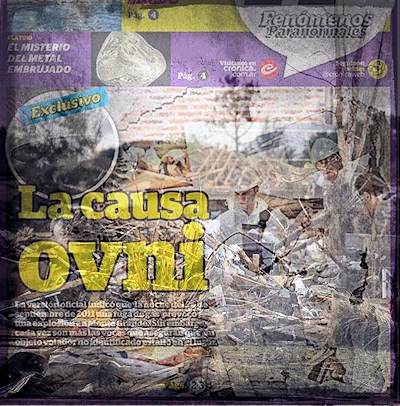 Local residents believe the truth about the crash is being concealed

Â  Â  Â CrÃ³nica FenÃ³menos Paranormales. The official story states that a gas leak caused an explosion in Monte Grande on the evening of 26 September 2011. A growing number of voices, however, asserts that a flying saucer crashed at the site.

Three years removed from the terrible explosion that caused one death and the total destruction of two dwellings, there are still too many issues regarding the causes behind the mysterious explosion whose magnitude overwhelmed all mathematical calculations. Official inquiries ascribed it to a gas leak in a domestic oven. However, many consider that the whole truth has not been told about what happened on 26 September 2011 in the 9 de Abril district of Monte Grande (Esteban EcheverrÃ­a prospect).

The event is remembered as the night of the UFO crash. A field research project conducted by a group of private researchers asserts that the official report conceals the true cause of the impressive event that changed the history of the popular Buenos Aires district.

Against those who insist that it was all restricted to a gas leak and a domestic explosion, space experts indicate that something very strange and hard to explain took place at the site. In spite of the time that has elapsed since then, the shadows of doubt and hesitation still persist. The subject is still discussed on the street and many believe there is sufficient evidence to think that the truth is hidden behind the apparent domestic mishap. They affirm that various reports alluding to an ungovernable, space-related phenomenon gained strength based on the evidence collected. Nonetheless, there are other dark and inexplicable aspects that have been the subject of deeper analysis by ufologists and researchers alike.

One of the earliest voices heard in that environment makes reference to that event, defined as a space phenomenon. â€œThat night I was able to see the sky light up and then hear the explosion caused by a UFO crash. Several of us saw it and agree that an unknown artefact fell on the two homes. But after the studies were conducted, someone decided to hide the truth,â€ explains Julio Espinoza, who owns one of the properties and is the cousin of the deceased victim, Silvia Espinoza Infante, 42.

The man states that he has photographs of his late cousin. He says that there are marks on her body that lend credit to the hypothesis that an unidentified flying object was the cause of it all. The other house belongs to a married couple, FabiÃ¡n Sequeira and Yiani Grey, accused of having a clandestine gas connection. Three years following the bizarre event, the families are still expecting a response from the authorities.

Witnesses to the Crash

Something fell over the homes located on the corner of Luis Vernet and Los Andes streets in Monte Grande at precisely 2:30 in the morning. At least a dozen people believe having seen a flying object that lit up the sky before plummeting and causing an explosion that leveled the entire structure. Whether descriptions of such an object are precise or not, the fact is that it caused one death, several injuries and tremendous desolation.

Interviews conducted in the neighborhood were done by personnel specializing in extraordinary events, and the points in which the versions agreed was critical, since this had to do with what later turned into the implosion hypothesis. Sources believe that a large luminous mass descended from the heavens at prodigious speed, and after crashing into a light post, rose again and passed over the trees surrounding the leveled houses.

This was the moment in which the implosion occurred. All objects in the vicinity were attracted to the main focus of the explosion. This was demonstrated, although engineers visiting the site have been unable to uncover the origin and magnitude of the phenomenon.

The First on the Scene

Few hours after the unprecedented explosion, members of Grupo Aurora â€“ in charge of the significant task of collecting data and research on the UFO phenomenon â€“ appeared on the scene. â€œWhat occurred that morning was truly impressiveâ€¦the place looked like it had been bombed,â€ explained Pablo Daniel Warmkraut.

That very afternoon, states the researcher, the property was cordoned off by municipal edict. From a neighboring home it was possible to see that something was taken out of the pit left behind by the explosion â€“ an object about which no information was given. The authorities made no reference to this and subsequently said that it was all a result of a gas leak at one of the dwellings. â€œOur groupâ€™s efforts are aimed at finding the truth, and the witnesses we interviewed agree that an enormous artifact fell from the sky. We believe that the truth about what happened that morning is being concealed, and for that reason, we will continue to lend our support to the survivors,â€ Warmkraut stated.

Following the eventâ€™s occurrence, personnel from various organizations involved in space exploration arrived. What is striking about this is that no official mention was made of the results of their investigations.

According to the property owners and neighbors, there was great confusion due to the fact that the personnel only spoke English and made no contact with the accident victims. Most of them wore special gear, and following an inspection with sophisticated instrumentation, the word was given to condemn the premises and declare them uninhabitable.

* [Translation Â© 2014 S.Corrales, IHU with thanks to Guillermo GimÃ©nez and Roberto Leiva]