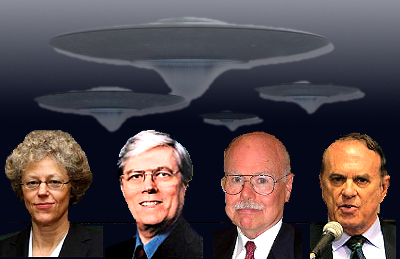 A crack in the wall

Â  Â  Â Hate to keep working a plowed field, but today we need to revisit the seminal â€œSovereignty and the UFOâ€ essay in the journal of Political Theory. That’s because of what’s happening tomorrow in Washington, D.C.

The “Sovereignty” piece, penned by political scientists Alexander Wendt and Raymond Duvall in 2008, laid out a theory for why Americaâ€™s higher-learning institutions were incapable of entertaining serious debates on The Great Taboo. The disconnect was more political than scientific, and the result, they argued, was intellectual poverty on a broad scale.

â€œIf academicsâ€™ first responsibility is to tell the truth,â€ they declared, â€œthen the truth is that after sixty years of modern UFOs, human beings still have no idea what they are, and are not even trying to find out. That should surprise and disturb us all, and cast doubt on the structure of rule that requires and sustains it.â€

At American University, international relations professor Patrick Jackson, Associate Dean for Undergraduate Education at the School of International Service, is not only familiar with the Wendt/Duvall piece, he sympathizes with major portions of it. â€œScience is the excitement of not knowing. Iâ€™d like to think we want our students to think more broadly than to simply reproduce in some form or fashion the same old idea theyâ€™ve heard all their lives,â€ says Jackson. â€œI mean, what is tenure if not to explore what Nietzche called untimely thoughts?â€

This is a big deal. Although increasing numbers of institutions are warming to the idea of sponsoring discussions about extraterrestrial intelligence, the SETI model â€” ETs are just like us, playing around with radio signals while conveniently stranded on some cosmic island far, far away â€” is about as far as theyâ€™ll typically extend their necks. Wednesdayâ€™s roundtable is different.

â€œHow often does an honors class take a serious look at UFOs? John Weiskopf is to be commended for making this happen,â€ states Kean. â€œAmerican University is breaking ground here which could help encourage other universities to do the same. Many people and departments at AU are rallying around this event and they all take the subject seriously. I hope this will pave the way for the academic community to become more objective and rational about this subject.â€

To be sure, cautions Jackson, the classroom bridge into this exotic realm is built on the foundation of science fiction in popular culture. But itâ€™s also a novel way of introducing students to AUâ€™s School of International Service, one of the top-ranked foreign studies programs in the country.

â€œWhat are international relations about if not an encounter with â€˜the otherâ€™ in some way? In this case, it would the alien,â€ says Jackson, who has yet to be convinced the evidence supports the ET premise. â€œIf you look at Star Trek, whether itâ€™s Klingons theyâ€™re dealing with or the Federation, itâ€™s all international politics. What we want to do is stimulate intellectual creativity and promote robust discussion, not to shut it down by saying itâ€™s prima facie absurd.â€

Could a successful AU symposium signal to other universities that itâ€™s OK to hold UFO forums without getting the cooties? â€œI could imagine a pathway,â€ Jackson says. â€œBut letâ€™s hold this forum and see what happens.â€

‘Miles O’Brien is Out’ as Moderator of UFO Panel