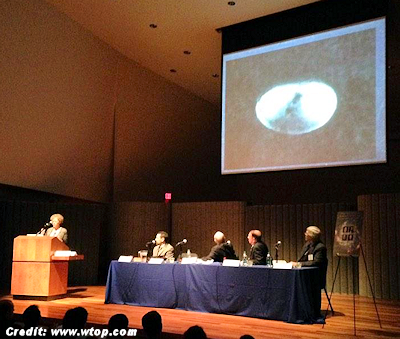 UFO experts say ‘we are not alone’

“one of the speakers used the occasion to reveal evidence he called a ‘smoking gun.'”

Â  Â  Â  WASHINGTON — UFOs were the topic of a panel discussion Wednesday night at American University, and one of the speakers used the occasion to reveal evidence he called a “smoking gun.”

“We have come into possession of a couple of Kodachrome color slides of an alien being lying in a glass case,” author and researcher Thomas Carey told the near-capacity crowd in Abramson Recital Hall.

“What’s interesting is, the film is dated 1947. We took it to the official historian of Kodak up in Rochester, New York, and he did his due diligence on it, and he said yes, this filmstrip, the slides are from 1947. It’s 1947 stock. And from the emulsions on the image, it’s not something that’s been Photoshopped like today. It’s original 1947 images, and it shows an alien who’s been partially dissected lying in a case.”