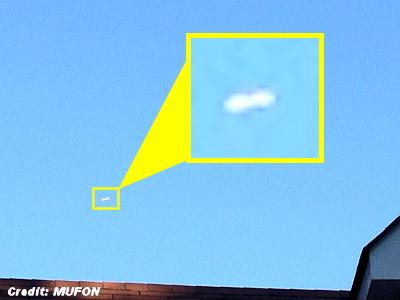 Â  Â Â A Georgia witness at Canton reported watching and photographing two cigar-shaped UFOs that seemed to be attached by â€œa small tubular connection,â€ according to testimony in Case 61365 from the Mutual UFO Network (MUFON) witness reporting database.

The witness was outside on a driveway and about to walk inside on November 6, 2014, when the object was first seen.

â€œI looked to my right facing southeast to see if my horses were in their stalls,â€ the witness stated. â€œI then noticed something rather odd flying above the barn as the sky was clear and not cloudy and still broad daylight. The object was flying in an odd sort of way, not like any aircraft I am aware of would or could fly.â€

â€œIt was shimmering. It appeared to be glowing. It had no wings and it looked like two silver cigar shapes attached together by a smaller tubular connection.â€ . . .

Multiple UFOs Photographed Over I-85 in Georgia?