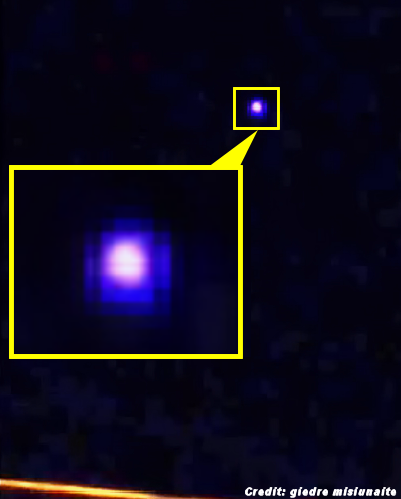 Colourful craft flew fast across the sky in Liverpool, sparking speculation among residents about what it was

Â  Â  Â This is the intriguing moment a multi-coloured ‘UFO’ was caught on camera soaring through the night sky above a city in Britain.

First it was bright blue, then red and then amber â€“ causing Giedre Misiunaite to wonder what on Earth was flying overhead.

The 28-year-old mum and her husband were left stunned by the strange phenomenon.

“We were standing there in the backyard having a smoke and my husband said, ‘look at that!’ the Liverpool Echo reports.

“It was bright blue and then it was staying still â€“ like it was floating â€“ and then it went really, really fast backwards and forwards.

“And then it went amber and then red.

“Then it just stood still and then disappeared but it came back about 10 minutes later. . . .

Man Snaps Photos of UFO in Skies Over Butleigh (UK)?