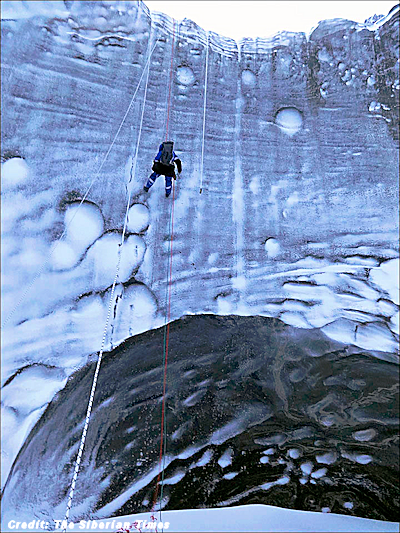 Â  Â  Â A mission this week to the newly-formed crater on the Yamal Peninsula in northern Siberia is expected throw fresh light on how this and other such phenomenon were formed. Experts are working on a theory that gas hydrates caused underground explosions in the same way as eruptions under the Atlantic Ocean may have led to the Bermuda Triangle phenomenon.

Our new pictures show how, for the first time, scientists used climbing equipment to reach the base of the crater – a lake at least 10.5 metres deep with a frozen surface.

Leader of the new mission, Vladimir Pushkarev, director of the Russian Centre of Arctic Exploration, told The Siberian Times: ‘We managed to go down into the funnel, all was successful. We used climbing equipment, and it is easier to do this in winter, than in summer, with the ground now hard.

‘We took all the probes we planned, and made measurements. Now scientists need time to process all the data and only then can they draw conclusions.’

The funnel of the crater is about 16.5 metres deep, not including an earthen rampart on the surface, formed in the blowout, of several metres in height. . . .

First Pictures From Inside of Mysterious Giant Hole in Siberia | VIDEO