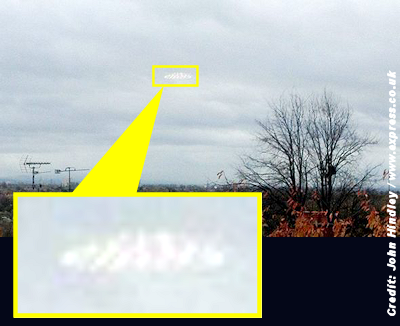 THIS UNEARTHLY image shows a UFO hovering over Manchester, its photographer has claimed.

Â  Â  Â  John Hindley managed to photograph the unidentified object while staying with a friend.

The 35-year-old craftsman claims he took the shocking snap after waking up to feel a “lunar pull” drawing him to the window at around 10am.

Mr Hindley said looked out the window and spotted the saucer, which floated over the Pennines mountain range for half an hour before vanishing.

He said: “I just thought it was a glitch in the sky. It was a few miles away. I took two photos and then just left it. . . .

Resident Snaps Pic of UFO Over Shipley (UK): “…It Looked Like Some Sort of Spaceship”