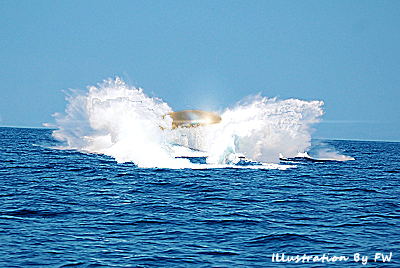 When NICAP compiled The UFO Evidence (1964), it included one section on â€œAir Force Observationsâ€ dating back to World War II that included 92 sightings, mostly by pilots and other flight crew members. Another section on â€œArmy, Navy and Marine Corpsâ€ included 36 sightings.

Â  Â Â  Project 1947 has updated or enhanced over one hundred cases in this new version of the draft Navy, Marine and Coast Guard catalogue (NavCat 2.0). The new material consists of illustrations, additional details and links to reference material hosted on the Project 1947 site. Various map references have been added to help place the incidents. We have also added over one hundred new cases to the catalogue, doubling the previous version in size. This updated compilation represents about 80% of the cases gathered so far.

Half of the cases in the current NavCat occurred before January 1953. Since Project 1947 is mainly concerned with cases at the beginning of the UFO era, this is not surprising. Many cases only came to light due to the more accommodating official UFO information policies in 1952. After the close of Project Blue Book, the number of cases from seagoing services declined as there was no central collection point for such incidents. The breakdown of the origins of the cases are: Navy 77%, Marine Corps 12%, and 5% Coast Guard, with the remainder from other services. Again the statistics will change as new cases come to light.

As this is a draft document, a number of equivocal incidents have been presented. Some entries might be considered quite difficult to believe or to be almost in the category of rumors. We hope to gain more information on such entries before the catalogue is finalized. Cases with weak provenance will be culled from the final version.

Some cases listed here are termed â€œunidentified contactâ€ which may be radar, sonar, visual, or all three. A number of these are not UFO-like at all. Some are listed to illustrate the type of reports in official files, shipâ€™s logs or other accounts. These too will be culled for the final document.

The Navy has an extensive world-wide submarine detection system. Few anomalous USO reports from this system are publicly known. The 1951-52 reports list come from Naval Intelligence Submarine Contacts which were supplied to Project Blue Book. Capt. Ruppelt wanted to see if it was possible to correlate unidentified submarine reports with UFO activity in the US. No correlation was found. Researcher Robert Todd was able to obtain a listing of the submarine contacts supplied to Ruppelt. Several unidentified or â€œdoubtful submarinesâ€ are listed in the catalogue. Most contain few details and do not seem to be of an unusual nature.

When one thinks of UFO cases at missile test ranges, one immediately thinks of the White Sands Missile Range in New Mexico. The Naval Air Weapons Station at China Lake also has some cases in the Project Blue Book files, some of which might appear to have only vague connections to UFOs. However, in the late 1960s Dr. James McDonald visited both Point Mugu and China Lake to speak to the facilitiesâ€™ personnel. After his first talk at China Lake, he was granted extraordinary access to the base where he interviewed a number of personnel who reported various UFO incidents there from as early as the World War II era.

Unfortunately some of this interview material was lost during an airline flight when Dr McDonald’s briefcase containing audio tape records and notes went missing. Fortunately some material from his investigations still existed in his papers at the University of Arizona. Dr McDonald also used his position as a contractor for the Office of Naval Research to cultivate sources to find other Navy cases. (Regrettably, he had no luck in his attempts to locate the records of the Navyâ€™s UFO project ordered by Secretary of the Navy Dan Kimball in 1952.)

A number of cases given to NICAP by various sources were confidential. They were often from serving military personnel or people in other high security capacities where their identities had to be protected from possible official repercussions. The authenticity of the cases were certified or sworn to by NICAP Board members or officials and they were referred to as â€œHidden Cases.â€ Keyhoeâ€™s Flying Saucers: Top Secret contained a list of such cases including a number of Navy, Marine and Coast Guard incidents. The location of the files on these cases is currently unknown, however, several of these cases have become public over the years: the North Atlantic case of Feb, 1951, the Korean case of 1951, and the so-called â€œNavy Squadronâ€ case over the Atlantic, 1953. (In this last case some of the correspondence concerning attempts to get accounts from the witnesses still exist. Also, the case has been confirmed through the efforts of Dan Wilson.) The other files are considered lost, but may have existed in a private office Keyhoe supposedly had in his hometown.

Keyhoe, as a Naval Academy graduate and retired Marine officer, had numerous Navy contacts and sources. The National Investigations Committee on Aerial Phenomena (NICAP)â€™s bulletin â€œUFO Investigatorâ€ contained a lot of officially released information on space or aviation developments and the occasional UFO report. Even with these contacts, however, Keyhoe was apparently not tipped off about UFO-related articles in the semi-official â€œNaval Aviation Newsâ€ magazine and the public release of information on the 1952 Greenland sighting.

As has been pointed out before, some witnesses of UFO events self-censored and did not report them. Unless other witnesses made a report, there would be no official record of the incident. In a number of cases the witness(es) might report the case, sometimes in writing, only to be told, â€œIf I report this, I will be laughed out of the Navy.â€ â€œI want to be promoted someday, so this will not be officially reported.â€ As a result, the official receiving the report ended up censoring the information and removing potentially good cases from the historical record.

UFO Reports are supposedly recorded in shipâ€™s logs, but very few of these log entries have actually been found in the final or â€œsmooth logâ€. Sometimes UFO reports are made in separate documents and not mentioned in the smooth log, even though witnesses claimed the entries were made at the time. Over and over again, in answer to FOIA requests, the Navy insisted that no records were kept, they were routinely destroyed, or they never existed in the first place. Despite this reticence to release information, some material has been located in official records. They were usually not listed as UFOs, but rather under unusual or unidentified radar contacts or displays.

During the Korean War, the 6004th Air Intelligence Service Squadron (AISS) and Air Technical Intelligence Liaison Office (ATILO) at the Far East Air Force (FEAF) did record several such unusual Navy contacts in their intelligence reports. [Air Technical Intelligence Liaisons or their representatives were present in Germany, Austria, Japan and Korea, the last especially during the Korean War. The German office made 12 UFO reports to ATIC in 1952 based on extensive investigations. The ATILO at FEAF made a number of official reports and comments based on their investigations. ATILO personnel in Korea had their own sightings.]

The Navy on occasion has been forthcoming with reports. The 1952 August Greenland report was made public in news headlines. The Pascagoula, Mississippi 1973 USO report was released to a number of sources. Other sightings were also later released to the press. After the closure of Project Blue Book, the Navy has responded to a number of FOIA requests with the release of records.

Most official Navy reports have come from either Project Blue Book or other agencies. One Navy source which regularly carried unusual aerial reports was the Hydrographic Office in its â€œNotice to Marinersâ€ publication. Some were mentioned in various publications such as â€œNaval Aviation Newsâ€ along with others.

The US Coast Guard is far more forthcoming. However, except for a small amount data in files titled â€œUFOâ€ or similar subjects, the majority of the information is listed under witnessesâ€™ names, locations or other such classifications. Locating a particular UFO report therefore is dependent on being able to nominate a specific name or location.

While the Navy and other agencies many times respond to requests negatively, many documents have been found in general files such as â€œNaval Intelligence Reports, 1946.â€ A number of documents on Ghost Rockets (GR), formerly classified as â€œTop Secretâ€ and below, were found just by turning over each page in the file. There was no separate file on the subject of â€œGhost Rockets;â€ indeed no such file on GRs or Swedish Incidents or a dozen other names has yet to be found except those within the papers of General LeMay. [LeMay had a number of such reports in messages in his file which also included General McDonald, USAAF A-2 Report on GRs to the Commander of the Air Force Commander General Spaatz.] Other than LeMayâ€™s papers, all other documents found to date were either by FOIA requests or by manually thumbing through documents at the National Archives and other record centers.

One instance of reports being made to officials that never reached the status of official records involves Major Dewey Fournet, USAF Intelligence HQ UFO monitor. Fournet made a presentation to Naval and Marine officers in a Naval Intelligence class in late 1952. He asked for and received three UFO accounts from class members. However, he did not send the reports to Project Blue Book, but rather they were recorded in a separate list of UFO reports and articles entitled â€œOperation Interloper.â€ The â€œOperation Interloperâ€ documents Fournet brought from the Pentagon were captioned as â€œUnclassified.â€ One speculation is that â€œOperation Interloperâ€ was used as a convenient way to learn of other UFO incidents by discussing the subject with individuals outside the government, or personnel who lacked the proper security clearance.

“NFIA”: (No Further Information Available) has been added to catalog entries for which no other details or information is known to exist.

Project 1947 continues to gather reports from the Seagoing Services. We welcome any new reports, information, clarifications and corrections.