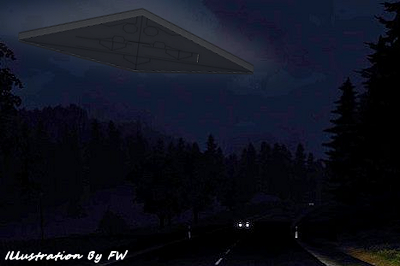 The witness stepped outside from a parked travel trailer along Highway 97 just southeast of the Diamond Lake Junction turn off about 6:45 p.m. on November 9, 2014, when the object was first seen coming from the south.

â€œIt was before the moon had appeared on the horizon and the sky was very dark,â€ the witness stated. â€œThe stars that night were very bright. When I looked up to the south I was looking directly at a metal tower of some sort (radio-telephone) with a red light on top. There was some illumination from a billboard in front of the tower.â€

â€œI saw a silent shape move very slowly â€“ perhaps 25 mph (guess) fly over the tower and my head and continue to the north. I was only able to see the UFO from roughly 60 yards away to the south and 60 yards away to the north. I could only see a moving blur until the object was directly overhead and the stars in the background were covered up as the shape passed between them and me. It was then I could see the outline of the craft. It appeared to be a diamond shape.â€ . . .