That is right, the time is finally here. Whether it works or not, as far as I know, this is the first time a group has attempted to seek funding to develop space warp technology (at least outside of those sneaky black budget projects at Area 51, right?). And in another sign of the times, they are turning to crowd sourcing to do it.

This team of researchers is lead by David Pares, he is an adjunct professor at the University of Nebraska at Omaha, Metropolitan Community College, Nebraska Wesleyan, and at Buena Vista College (On-line program). He teaches on topics from physics to geography, and says he has a “multi-disciplinary background in science and engineering.”

Others in the team included a physics PhD student from the University of Nebraska, a retired engineer who worked in electronic warfare and has a background as a test pilot and flight control engineer, an aircraft systems designer, and a couple of people specializing in communications and social media.

Together the group make up the members of the company in which they work under to develop their space warp technology, Space Warp Dynamics, LLC. They believe they have demonstrated that their technology works on a very small scale and they can make it work on a much larger scale, however, they need more funds to do it. That is where their Indiegogo campaign comes in.

Indiegogo is probably the second most popular crowd sourcing site behind Kickstarter. The advantage to Indiegog is that even if you don’t get all of the money you are seeking, you get to keep what you do collect. With Kickstarter it is all or nothing.

According to their Indiegog campaign, the team needs $80,000 to take their project to the next level. And this next level is pretty exciting. Thus far, they believe they have been able to measure on effect on light and on small objects using their space warp technology. They now want to build a scale model of a spacecraft that they believe they can make lift off the ground using a warp drive.

I have interviewed Pares on a coupe occasions, and honestly, the details of the technology go way over my head. But I will try to describe how he came to discover it, and how it works, in very layman terms, since I am very much a layman in this case.

Pares says he first began to theorize about this space warp technology by observing some unique mysterious cases of possible naturally occurring space warp bubbles or tunnels. In particular, the 1970 case of pilot Bruce Gernon. Gernon claims he got caught in a storm while flying his Beech A-38 Bonanza over the Bermuda triangle. He says he saw a hole in the clouds that he flew into, and at the end of this tunnel in the clouds, was surrounded by an “electric fog.”

He merged through the clouds a few seconds later and found he was in radio contact with a tower in Florida, a hundred miles from where he should be. If Geron is correct, he traveled a hundred miles in a few seconds. This lead Pares to believe the conditions in those clouds may have created a natural space warp tunnel. 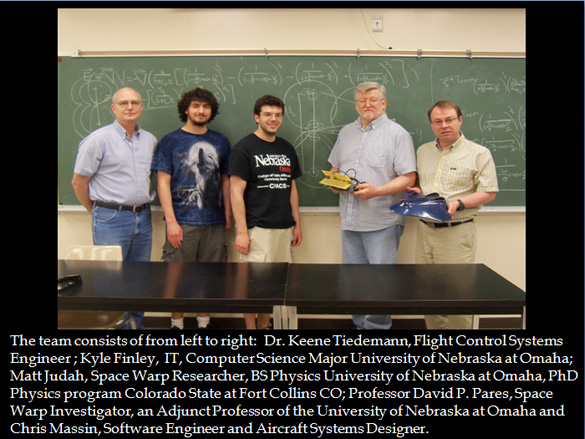 Pares spent years trying to understand the sciencey stuff that went on in those clouds, and eventually came up with a theory. Pares feels that space time can be expanded behind an object, and contracted in front of an project to create a warp bubble that can propel an object at an incredible rate of speed.

The theory of the warp bubble was actually proposed by Mexican theoretical physicist Miguel Alcubierre in 1994. However, Alcubierre’s model calls for massive amounts of energy. Pares felt that the Gernon event was an example of warp at work at a much lower power level.

The scale model craft that the team hopes to lift off the ground using their warp technology. (Credit: Space Warp Dynamics, LLC)

I know science guys, I am passing over a lot of sciencey stuff, but you can go to his website for more. Space Warp Dynamics now has a patent on this technology, and they want to build the first space warp powered drone. How cool is that?

The team is very serious about their project, and what they believe their technology can accomplish. I say we all throw in a few bucks and see if they can pull it off. Worst-case, they are still the first to give space warp a go, and hopefully something can be learned from it. Best case, we are all cruising around space in the next few years. Finally, we can see what spring is like on Jupiter and Mars, first hand. Why let the robots have all the fun?