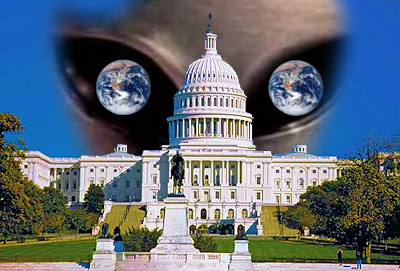 By Jennifer Harper
The Washington Times
11-24-14

Â  Â  Â While Congress and the White House argue over illegal aliens, Stephen Bassett â€” founder of Paradigm Research Group and a registered lobbyist – continues to demand that lawmakers, the White House and assorted officials tell what they know about aliens. As in extraterrestrials.

The determined Mr. Bassett has already organized a â€œCitizen Hearing on Disclosureâ€ last year at the National Press Club in the nationâ€™s capital. A DVD of the 30-hour close encounter between witnesses, six former congressmen, law enforcement, experts and journalists was sent to all members of Congress on Nov. 5, as a matter of fact.

Mr. Basset now says he will â€œrenew direct engagementâ€ with lawmakers and has organized an aggressive social media campaign among like-minded voters who also want answers about UFO sightings, alien technology and other matters. He offers a dozen sample tweets for interested folk, a #disclosure hashtag and a mission statement: â€œDedicated to ending the government imposed
truth embargo regarding an extraterrestrial presence engaging the human race.â€

The Idiocy of the Disclosure Movement