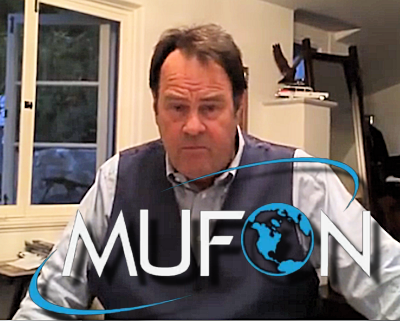 Dan Aykroyd, longtime paranormal and UFO enthusiast, has made an endorsement video for the Mutual UFO Network’s (MUFON) Kickstarter campaign.

Aykroyd’s work in TV and film is legendary, and he is a major UFO buff. The extent of his interested was demonstrated in the 2012 documentary Dan Aykroyd Unplugged on UFOs. It is 2 hours of Aykroyd talking about UFOs, which may sound boring to some, but I loved it. His level of knowledge on the history of the phenomena is remarkable. He shows he is at par with some of the top researchers in the field.

A video released recently the MUFON (seen below) shows he is still keeping up with the topic. In the video, he is endorsing MUFON’s Kickstater campaign. The goal of the campaign is to raise $78,000 to remake their website and UFO database. The plan is to make the website and reporting interface more user friendly for researchers and people in the general public who wish to report their personal UFO sighting.

In the video, Aykroyd talks about his longtime interest in the topic of UFOs, and mentions the television series Psi Factor he produced with his brother. He explains that it “touched on inter-dimensional issues.” . . .

Aliens: “They Don’t Want Anything to Do with Us,” says, Dan Aykroyd