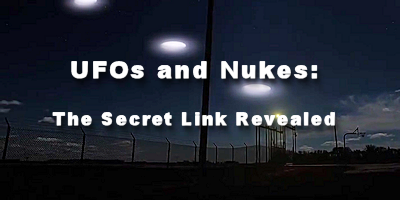 Over the past 41 years, I have interviewed more than 150 U.S. military veterans regarding their knowledge of UFO incursions at American nuclear weapons sites, including incidents during which ICBMs malfunctioned, just as a disc-shaped object hovered over them.

CNN streamed my September 27, 2010 press conference in Washington D.C. at which seven of the veterans discussed their involvement in those or similar events:

My film, UFOs and Nukes: The Secret Link Revealed, is currently in production and nearing completion. However, our funds will be exhausted before all of the work can be finished. Some of the computer-generated animation, post-production audio, and musical scoring is on hold. My colleagues and I estimate that an additional $25,000 will be needed to wrap up the project.

The purpose of this film is public education. The information I have gathered over the past four decades confirms the reality of UFO activity at American and Soviet nuclear weapons sites. The specifics, as reported by the ex-military witnesses and declassified documents, are both stunning and tremendously important.

Significantly, UFO incursions at American ICBM sites have continued to occur long after the end of the Cold War. On October 23, 2010, at F.E. Warren AFB, Wyoming, communications with launch officers operating 50 Minuteman III missiles were temporarily disrupted. According to my then-active duty U.S. Air Force sources, a huge cigar-shaped UFO was observed during the incident.

It’s clear that the American government does not plan to reveal these amazing and perhaps ominous developments any time soon. Therefore, a grassroots effort must be made to acquaint people everywhere with a situation that has been successfully kept secret for decades.

While my 2008 book, UFOs and Nukes: Extraordinary Encounters at Nuclear Weapons Sites, has introduced this potentially paradigm-altering information to thousands of readers, a widely-distributed film on the subject will reach millions worldwide.

Rather than launching a Kickstarter or Indiegogo campaign, which would involve unnecessary expenses, we have decided to implement a simplified public appeal. Those who would like to support this effort, or more information, may go to my Support Our Film webpage.

Knowledge is Power. If you believe that this campaign should continue, please help us Spread the Word by going to my website and making a contribution.