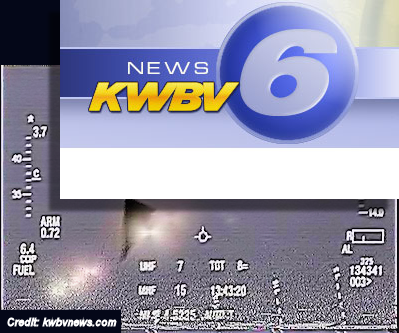 Actually, the problems with the credibility of the video do not stop with the fake news channel. The video was posted on a YouTube channel using the name David Collins. The KWBV news website claims “David Collins is an investigative journalist, living in Phoenix, Arizona. David was embedded with coalition forces in the Operation Iraqi Freedom and Operation New Dawn, and has covered human interest stories since 1989.”

However, there doesn’t seem to really be a journalist named David Collins as described. Furthermore, although Collins appears to be the only journalist writing for KWBV, his stories are all about him and written in the third person.

Other stories on the site include cattle mutilations and a missing persons case from March, 1997. The same month as the Phoenix Lights UFO incident. There are also stories about the “longest running missing person’s case,” and “the most infamous killer in Arizona State history.” Neither the missing persons case nor the killer appear to be real.

One of the stories references another news channel, KUDP, which also does not exist, and doesn’t even have a fake news website like KWBV.

Frank Warren, who runs the website UFO Chronicles, says he found that the website was created earlier this year, even though some stories are back dated to 1997.

So why go to all the trouble making the fake websites and videos? Clues to that answer may be found in yet another fake website called American Crimes. This website is for an alleged television show that will be hosted by Collins. In a video posted in July on his YouTube page, Collins describes the first episode of the series. The outline of the show may be telling. . . .

THE PHOENIX LIGHTS, THE REAL INVESTIGATION | 17th Anniversary of The Phoenix Lights