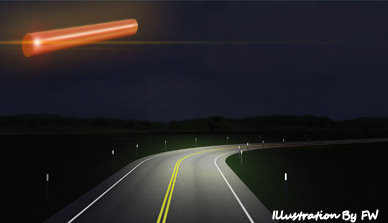 A Pennsylvania witness at Lancaster County reported watching and stopping to photograph an orange, rod-shaped UFO that appeared to be hovering in the sky 2-3 miles away about 1:24 a.m. on December 1, 2014, according to testimony in Case 61763 from the Mutual UFO Network (MUFON) witness reporting database.

The witness was driving home from work when a “long, bright orange light” was noticed in the western sky.

“The light was the most intense in the center and at the ends, but it was constant, almost like fiber optic,” the witness stated. “It appeared to be 50 yards wide, just a few meters tall, and 2-3 miles away. The object was hovering.”

As the witness drove through hills, the object would appear and disappear from view. When the object came into view again, the witness pulled over to take a photograph.

“When I parked and stepped out of my car the object rotated in place and was now very narrow and was shining white – almost like a position light.”

The witness watched as the object then moved quickly away.

“The object than flew west in a straight line and vanished quickly. As it vanished a bluish burst of light engulfed the object. This happened so fast I wasn’t able to capture a picture. I was so curious I drove towards where it had just been hoping to see some evidence of something but found none. I wouldn’t believe any of this had I not seen it myself. Truly unexplainable.”