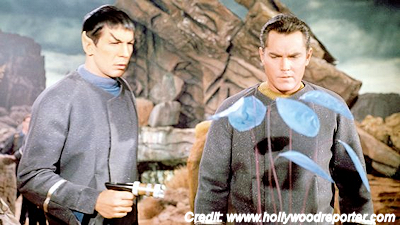 Dec. 3 may not feel like an important day in the annals of science fiction, but leave it to Leonard Nimoy to reveal the hidden truth, via Twitter:

Note that he said “the first” pilot. He’s referring to “The Cage,” written by show creator Gene Roddenberry and directed by Robert Butler, which was presented to — and rejected by — NBC more than a year before the series finally debuted in 1966. Despite being turned down by the network, and featuring a cast almost entirely different from the show fans would come to love later, “The Cage” actually made it to air as part of the first season of Star Trek, with scenes edited into a two-part story titled “The Menagerie” that aired Nov. 17 and 24, 1966.

Although “The Cage” was rejected on grounds of being “too slow” and “too intellectual [with] not enough action,” NBC wasn’t ready to say no to the series just yet, asking Roddenberry to rework the concept and create a second pilot. In the process of reworking, he dropped the entire cast with the exception of Nimoy and brought in William Shatner as the new captain of the Starship Enterprise. A legend was about to be born. . . .