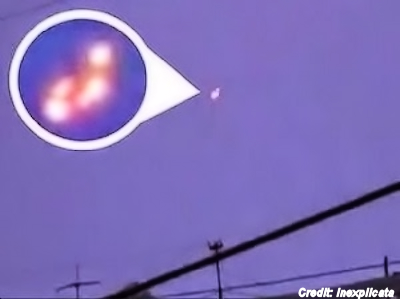 Carlos Rieger reports that various lights – unidentified flying objects – have been seen over the Argentinean city of Gualeguaychú.

GUALEGUAYCHU – Carlos Rieger, a member of the Ufología Gualeguaychú group, reported recent sightings of lights in the sky over the Nandubaysal beach resort, the Pueblo Nuevo district and Plaza San Martin.

According to Rieger, lights were seen over the beach resort on Saturday, November 22, which were also sighted over Pueblo Nuevo. He added that last Tuesday, in the area of Plaza San Martin, a large, transparent violet-hued circumference had been seen.

“We have all of the reports, the times at which the occurred, the time of the most significant luminous point. Let us not forget that there is an air corridor over Gualeguaychú which comes from Aeroparque, a bifurcation of the domestic and international flights. Planes can be seen every ten minutes, but such lights are unmistakable. The luminous phenomenon is different. Everything leads one to suppose it is a UFO,” he added.

The subject was brought up last weekend at the UFO research conference held in Máximo Paz, Province of Santa Fe.