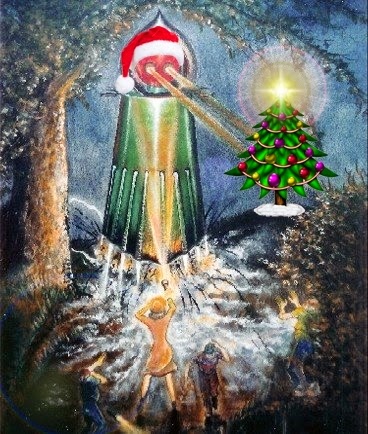 ******* FLATWOODS MONSTER CHRISTMAS EVE SHOW *********
‘Twas the night before Christmas
When all through the house
Not a creature was stirring…
Uh-oh… Not this year people!

Wait! What?
.
This Christmas eve—gather ’round the fireplace—hold onto your red hat—grab hold of your jingle bells and take a big hit of the fortified EggNog!  Be prepared, friends and loved ones, to hear a story of a different kind this Christmas eve that will have you at the edge of your sleigh seat!

.
See, this year there will be real “creatures” stirring about the house on December 24!  Frank C. Feschino, Jr. appears as a guest on Dark Matter Radio with host Martin Willis. This Christmas eve, tune in to have another visitor besides Santa Claus down the chimney, perhaps, when author Frank C. Feschino, Jr. talks about his investigation into the infamous “Flatwoods Monster”!   His latest book details the entire “Braxton County Monster” incident, forgetting a secret air war with ET!  Remember, reader, Flatwoods is the END of the story.
.
First you have to wade UFOs making effortless incursions into sensitive airspace around Washington DC during the Summer Of Saucers in 1952, orders subsequently issued to the military of the United States to shoot those UFOs down, 21 plus hours of sustained UFO activity on the 12th, a crash landing of a fiery ball on the Bailey Fisher observed by sober adults and children… and then you can start talking about a “Flatwoods monster”… followed by a HUGE aftermath, eh?  Those are the facts.
.
Frank Feschino, the authority on this terrifying close encounter incident of September 12, 1952, will be discussing his findings on this classic case, which he has spent more than 22-years investigating and researching. The incident goes something like this: “When what to my wandering eyes should appear… was a 12-foot-tall creature—wearing encounter-suit space gear.”
.
For information to hear the show please go to (http://darkmatterradio.net/shows/podcast-ufo/)
.
For additional information about Frank Feschino’s research and book (plus 45 minute documentary) please go to www.FlatwoodsMonster.com