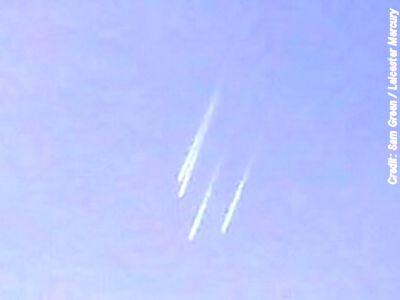 Sky watcher Sam Green thought he’d struck gold when he captured this incredible image of what looks like meteors speeding towards Earth.

The 27-year-old builder, from Countesthorpe, was doing a job for his boss in Kibworth when he spotted mysterious goings on high in the clear, blue sky.

He said: “Where we were is on a flight path and you often get planes and helicopters flying over from Leicester Airport, which are interesting to look at and my camera is never far away from me.

“There was this brilliant, clear blue sky on Thursday and it was about 2pm when I happened to look up and noticed these two peculiar objects with vapour trails.

“ They were close together and looked like they were falling straight down.

“When I looked away and looked back they were gone. I thought ‘that’s strange’.

“But about half an hour later, I looked again and saw four of them, so I thought ‘right, I’m going to take a picture’ and grabbed my camera.” . . .