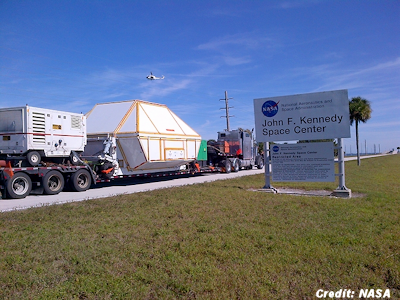 After traveling more than 3,600 miles above Earth and 600 miles over sea, NASA’s Orion spacecraft completed the final leg of its journey by land Thursday, arriving home at the agency’s Kennedy Space Center in Florida. Media representatives are invited to attend an event at 10:30 a.m. EST Friday, Dec. 19, marking the arrival.

U.S. media must apply for credentials to attend Friday’s event at Kennedy by 8 a.m. Friday. All media must present two forms of legal, government identification to access Kennedy. One form must be a photo ID, such as a passport or driver’s license. Media not previously credentialed for SpaceX CRS-5 will be issued badges at the Kennedy Badging Office, located on State Road 405 east of the Kennedy Space Center Visitor Complex. Journalists must arrive at Kennedy’s Press Site by 9:45 a.m. Friday for transportation to the event.

Media accreditation requests must be submitted online at:

The deadline for international media to attend in person already has passed.

The spacecraft’s cross-country return, a 2,700 mile road trip from Naval Base San Diego to Kennedy, sets the stage for in-depth analysis of data obtained during Orion’s trip to space and will provide engineers detailed information on how the spacecraft fared during its two-orbit, 4.5-hour flight test, completed on Dec. 5.

“Orion’s flight test was a critical step on our journey to send astronauts to explore deep space destinations,” said Bill Hill, deputy associate administrator for exploration systems development at NASA Headquarters in Washington. “We stressed Orion to help us evaluate its performance and validate our computer models and ground-based evaluations, and the information we gathered will help us improve Orion’s design going forward.”

Data was gathered in real time during the flight test, and more was removed from the vehicle when it arrived on land in San Diego before it was crated for the drive to Florida.

“The flight itself was such a great success, but that’s only the beginning of the story,” said Orion Program Manager Mark Geyer. “Now we get to dig in and really find out if our design performed like we thought it would. This is why we flew the flight. We demonstrated on Dec. 5 that Orion is a very capable vehicle. Now we’re going to keep testing and improving as we begin building the next Orion.”

An initial inspection of the crew module turned up nothing unexpected. There were indications of some micrometeoroid orbital debris strikes on the sides of Orion, which was anticipated.

With the spacecraft back at Kennedy, where it was assembled and prepared for launch, engineers will be able to remove the back shell of the spacecraft and perform inspections of its cabling, fluid lines, propulsion system and avionics boxes. Heat shield samples already have been removed and sent to a laboratory where their thickness, strength and charring will be examined.

The information will be used to make improvements to Orion’s design before its next flight, Exploration Mission-1, when it will launch uncrewed on top of NASA’s new Space Launch System for the first time into a large orbit around the moon.

While the information is being gathered from the flight test, testing also will continue on Earth. On Dec. 18, engineers dropped a test version of the Orion capsule from a C-17 aircraft 25,000 feet above U.S. Army’s Yuma Proving Ground in Arizona. The latest in a series of tests designed to certify Orion’s parachute system, the test simulated a failure of one of Orion’s three main parachutes for a first-time demonstration of several modifications made to the parachute system to improve its performance.

Panels for the pressure vessel that will form the inner structure for the next Orion crew module are in production and set to be welded together at the end of summer 2015. Meanwhile, the European Space Agency is building the test article of the Orion service module they will be supplying for Exploration Mission-1, and assembly of the launch abort system for that flight will begin in April.

NASA’s Ground Systems Development and Operations Program managed Orion’s cross-country trip from Naval Base San Diego to Kennedy. The crew module will be refurbished for use in Ascent Abort-2 in 2018, a test of Orion’s launch abort system. . . .