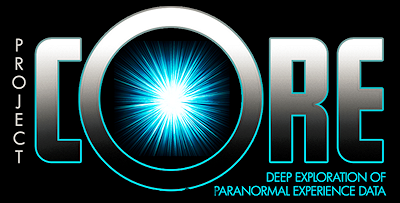 Reports from Project Core were recently published at projectcore.net. The project was a professionally conducted research endeavor in which written testimonies of paranormal experiences from over 200 individuals were obtained via surveys and considered at length. Questions were posed to respondents in which trends in responses could be analyzed. Several avenues for potentially productive future research were subsequently identified.

I have read all material posted on the Project Core website. After having revisited the reports and commentaries a few times, and feeling that I have reasonably processed the data and observations contained therein, I feel there are some important points.

Among the more relevant observations, in my opinion, is that such a project is most certainly possible within the UFO and paranormal communities. Not only does Project Core contradict popularly held assumptions that science is unable to systematically and competently address reported paranormal phenomena, but it also demonstrates that self-described experiencers and professional researchers can collaborate on such ventures.

That leads us to another important point I considered as a byproduct of reviewing Project Core: Extreme opposite camps within ufology, which I will for the time being label “unquestioning believers” and “stubborn debunkers”, share responsibilities for collective tire-spinning. Futility rests on the shoulders of both demographics, not just one or the other.

Obviously, unquestioning belief is unattractive to critical thinkers. It is easy to see how claims of vacuum cleaner nozzles on the surface of Mars might lower public interest in the UFO genre, at least among those some of us might prefer be drawn to it.

In addition to those who consistently try to direct our attention to interpretations of photos at craptastic dot com, the unquestioning believer side of the scale also includes individuals and organizations which manipulate and shape those poorly conceived beliefs. That would include alien-hunting hypnotists that sell their clients’ data without consent, historians that recommend chastity belts to their research subjects, and the organizations that provide them venues to promote their unsupported claims while prospecting for more people to exploit.

There is even much more to it than that, though. Among the additional harmful social dynamics is a cultism that quickly embraces newcomers seeking credible information. In return for courageous open-mindedness, newcomers are often bombarded with assurances that everyone abducted by aliens had difficulty accepting it at first. The pseudo recovery might include suggestions to attend meetings purported to provide emotional support which, in actuality, serve to spread such beliefs inherent to the genre as big news about an alien presence will be released any day by the White House. One might also get indoctrinated with a lot of material that will assure future hypnosis sessions would go as hoped.

If one is fortunate enough to get out of a recon mission into the UFO community without landing in front of a rogue hypnotist and author masquerading as a therapist, they can cut their losses and return to a life where they keep relatively quiet about those ‘something weird happened one time’ stories. If not that fortunate, well, then they have a whole lot more emotional baggage to carry and healing to do than they started with – and that’s if they’re wise and brave enough to consider that many of those “helpful” UFO people have no idea whatsoever what the hell they’re talking about.

So the unquestioning believer demographic has many detrimental aspects. One of the most damaging is that its members are prone to interpreting the experiences of others and thinking themselves qualified to explain them in outrageously assumptive detail. The bottom line is that people of higher intelligence and emotional availability don’t want other people trying to tell them what happened to them who have no idea and don’t even know they don’t.

The stubborn debunkers conduct a different, but nonetheless detrimental, brand of bait and switch. They often try to lead newcomers to believe they promote skepticism and rationality when, in actuality, they can be among the most opinionated, dogmatic demographics one might ever encounter. Healthy skepticism is a very good thing – I would confidently say entirely necessary – but it is nowhere to be found among stubborn debunkers and despite their claims to the contrary.

They make fun of people who hold ideas and beliefs different than their own, employ sarcasm as a preferred mode of expressing themselves, and, by and large, do not even conduct research – they just criticize and make light of others who do, unless it happens to support their preferred perspective. They virtually never address a topic of which they are unwilling to offer speculative conclusions, and they fail miserably at asking the right, productive questions.

In his 1992 paper, ‘CSICOP and the Skeptics: An Overview’, writer/researcher George P. Hansen observed that facets of the organized skeptical movement opted to employ an extended public relations campaign rather than conduct research. “These activities display more parallels with political campaigns than with scientific endeavors,” Hansen wrote. His paper frequently came to mind while reading Project Core and considering how the project embodied what professional research conducted by competent and qualified individuals actually looks like and is capable of producing.

Stubborn debunkers typically attempt to minimize reported experiences of high strangeness or conspiratorial implications by employing any number of explanations that might indeed be applicable in some circumstances, but do not necessarily apply to a case at hand. While the burden of proof indeed falls upon one asserting a claim, the fact of the matter is that a more discerning group of experiencers and researchers do not assert claims, but simply question. The bottom line – again – is that people of higher intelligence and emotional availability don’t want other people trying to tell them what happened to them who have no idea and don’t even know they don’t. Same as with the unquestioning believers. Whether one’s field of interest includes psychic phenomena, entities, the intelligence community or most anything else, they should prefer to allow facts lead them to conclusions, not lobbying techniques.

So to tie this together, the UFO community consists of demographics with virtually polar opposite beliefs but each detrimentally effecting the paranormal genre in similar manners: They try to lead others to believe they are able to explain things to them of which they actually have little idea, are frequently unfamiliar with relevant material and are often not even qualified to venture an intelligent guess. People therefore become very reluctant to share their ideas and experiences for various different reasons, not just the well known fear of ridicule invoked by stubborn debunkers, but also because they don’t want unquestioning believers saddling their reputations with wild and disturbing rumors based upon little more than questionable interpretations of reality.

And that is what’s different about Project Core. I could tell you a lot of things it’s not, but here’s what it is: An objective and professional assessment of experiences reported by over 200 individuals, as well as assessments of answers provided to a series of specific questions. The only stipulations for reporting experiences were to provide sincere accounts, no matter how bizarre the perceived events, and to not submit any information obtained via hypnosis.

Researchers demonstrated a full awareness that surveys obtained did not necessarily contain accurate information, but might at times be more representative of what respondents interpreted, such as in the cases of reported physiological circumstances and perceived experiences. Data was professionally organized and presented, with much careful consideration given to patterns and correlations that seemed to emerge.

About a third of those surveyed indicated multiple witnesses were present during the events. Taking into consideration that many respondents reported multiple experiences, researchers suggested that future events might be accurately anticipated. A number of additional avenues for future research were also identified, including the implementation of cost effective technological advances.

It was also apparent that researchers of alleged alien abduction have largely failed to explore the cases of witnesses who have unaided conscious recall of events. Pursuing such witnesses, while ceasing to rely upon regressive hypnosis as an investigative tool, was strongly suggested.

Yet another emerging point was that respondents largely felt their experiences have not been portrayed accurately in media. Researchers considered that assertion might be due to the more bizarre aspects of the reports being frequently omitted by those portraying the experiences to the public. Readers were additionally free to surmise that ill advised use of regressive hypnosis, and leading of witnesses by biased hypnotists and investigators, likely play major roles in such inaccurate media portrayal. While reading Project Core reports, it seemed entirely possible to me that the common abduction narrative is, in reality, a rather small percentage of reported experiences, if not largely inaccurate and unreported. At the least, it appeared reasonable to question if the stereotypical alien abduction narrative is a very poor representation of what people perceive themselves to be experiencing.

I recommend reading the material posted at Project Core. There are several intriguing points and interesting insights.

But mostly I recommend it because it serves as a model of what professional research of reported paranormal experiences looks like. Pro research is pro research. Everything else is not.