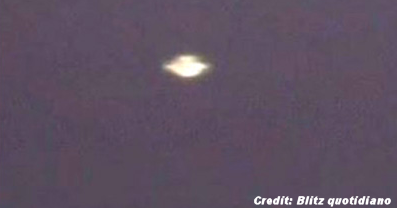 CAPUA (Caserta) – A UFO in the skies of Capua, a town in the province of Caserta? The unidentified object was reported by some people who spotted it late on Monday, December 15th.

It was a bright light in a cylindrical shape in the sky, a strange phenomenon judged by the group of people who after seeing it in the heavens decided to photograph it.

It is a very strong light, visible from almost any point of Capua.

The photo above was posted on various local sites and was taken from the hills of Tifata in the hamlet of Sant’Angelo in Formis . . ..