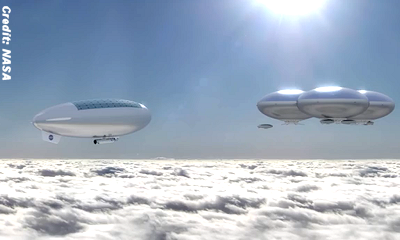 Should crewed exploration of Venus come before we try to go to Mars?

. . . At 50 kilometers above its surface, Venus offers one atmosphere of pressure and only slightly lower gravity than Earth. Mars, in comparison, has a “sea level” atmospheric pressure of less than a hundredth of Earth’s, and gravity just over a third Earth normal. The temperature at 50 km on Venus is around 75 °C, which is a mere 17 degrees hotter than the highest temperature recorded on Earth. It averages -63 °C on Mars, and while neither extreme would be pleasant for an unprotected human, both are manageable.

What’s more important, especially relative to Mars, is the amount of solar power available on Venus and the amount of protection that Venus has from radiation. The amount of radiation an astronaut would be exposed to in Venus’s atmosphere would be “about the same as if you were in Canada,” says Arney. On Mars, unshielded astronauts would be exposed to about 0.67 millisieverts per day, which is 40 times as much as on Earth, and they’d likely need to bury their habitats several meters beneath the surface to minimize exposure. As for solar power, proximity to the sun gets Venus 40 percent more than we get here on Earth, and 240 percent more than we’d see on Mars. Put all of these numbers together and as long as you don’t worry about having something under your feet, Jones points out, the upper atmosphere of Venus is “probably the most Earth-like environment that’s out there.” . . .