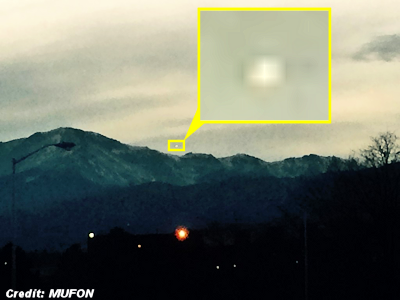 Colorado witnesses at Colorado Springs reported watching a “lighted object” hovering over nearby mountains in the shape of a horseshoe that quickly disappeared, according to testimony in Case 62085 from the Mutual UFO Network (MUFON) witness reporting database.

The reporting witness and his wife were driving on December 16, 2014, when the object was noticed above the north ridge of Pikes Peak.

“We were driving at the time, headed west on Woodmen Road, and then west on Rockrimmon,” the witness stated. “Then west on Vindicator. We witnessed what I thought was a light that had a horseshoe shape. My wife thought it was an object emitting light, but the shape was consistent for both of us.”

The witnesses’ wife used a cell phone to take two photos of the distant object . . ..