While some people doubt there are dwarves, the very small people of the 5,000 year old city Makhunyk are a living proof and concrete examples of people with a height of about one meter.

Maybe this city could solve the mystery of the unseen dwarves and giants of Kerman Desert.

According to Mehr News Agency, the city of the dwarfs is located at the southern edge of the Lut Desert near the ancient city shahdad in Iran.

It’s also the city where world`s first metal flag is detected. Currently, the flag is on display in a museum located in Tehran and opened to the public.

Image below of a mummified body.

Farzad Forouzanfar, an anthropologist of the Cultural Heritage and Tourism Organization of Iran said that anthropological studies revealed the small mummy was actually 400-years-old and did not belong to a dwarf at all but to a premature baby that had been mummified through natural processes.

Maybe the small mummy pictured above did not belong to a dwarf but other small ancient mummified bodies, have also been found in the same area. Image right.

During recent excavation operations in Golbaf the region of Kerman, parts of a mummified skeleton that the locals refer to it as ‘The Mummy’ has been found.

The remaining parts of the body belonged to a person with very large organs.

Image below: the feet of this body is equivalent to 60 cm in length.

By adding the extraordinary giant remaining body parts and figurines found by the local people in Kerman to the cultural heritage, the scientific community is still trying to unravel the mystery of the dwarf people.

Archaeologist Mir Abedin Kaboly said: “These people suddenly left the town and the reason is unknown.”

“Despite they left their houses and barricaded the doors with mud and bricks with their belongings and other valuables still inside their houses, there is no doubt they wanted to come back after a while, but that never happened” Mir Abedin Kaboly said.

Despite Shahdad is one of the hottest places of the world and maybe due to extreme period of drought 5,000 years ago this people left their city and homes, it remains a mystery why they not returned to their homes. 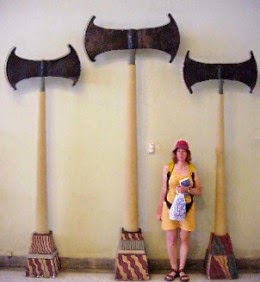 Artifacts, skeletons and tools have been found in various places in the world which indicate there have indeed been people at one time who were much larger than average height.

Tools like giant axes and swords have been found in Iran and now with the latest discovery of giant mummified body parts and figurines it support the theory that once giants roamed the Earth.

Makhunyk, city of the dwarves.

Thanks to and translated by Amir Khayyati for UFO Sightings Hotspot.