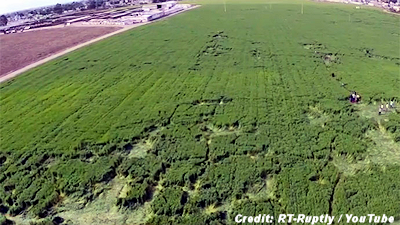 Hundreds of people have flocked to the Mexican municipality of Texcoco, attracted by a curious phenomenon of crop circles that appeared on Christmas Eve. The mystery of a seven-hectare pattern hasn’t been solved yet.

In a cloudy and rainy sky, residents of the municipality 25 km northeast of Mexico City reportedly saw bright lights on Thursday night. According to local media, the next morning they were surprised to see strange patterns in a local barley field. . . .