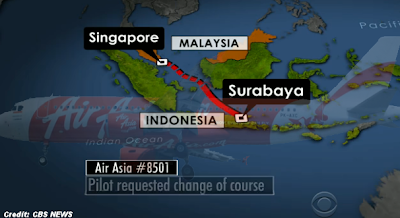 JAKARTA, Indonesia – Aircraft and ships that spent several hours searching Indonesian waters turned up no sign of an AirAsia plane that disappeared Sunday with 162 people on board in airspace possibly thick with dense storm clouds, strong winds and lightning, officials said.

Aircraft searching for AirAsia Flight 8501 called off the effort for the night and will resume at Monday morning, said Achmad Toha of Indonesia’s search and rescue agency. Some ships were continuing the search overnight, he said.

The plane took off Sunday morning from Surabaya, Indonesia’s second-largest city, and was about halfway to its destination, Singapore, when it vanished from radar.

The last communication between the pilot and air traffic control was at 6:13 a.m. (2313 GMT Saturday), when the pilot “asked to avoid clouds by turning left and going higher to 34,000 feet (10,360 meters).” It was last seen on radar at 6:16 a.m., and a minute later was no longer there, Djoko Murjatmodjo, Indonesia’s acting director general of transportation, told reporters. . . .

AIRASIA FLIGHT QZ8501: Several Aircraft Nearby When Signal was Lost

Plane with 162 on Board Vanishes! | VIDEO