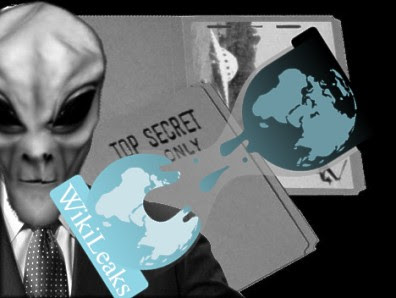 Julian Assange could be about to escape his cramped existence in the Ecuadorian embassy using an incredible ‘trump card’, if you believe the utterances of possibly deranged UFO fans.

Documents released by Wikileaks have already offered hints about little green men from beyond the stars – including tantalising titbits from Japanese and Lithuanian politicians.

But some UFO sites, naturally, believe that the wizard-haired Wikileaks maestro might have something better up his sleeve – namely evidence of alien spacecraft parked secretly in government hangars.

There may well be something to do with bodily probes, too. There usually is.

One Japanese politician says, in a Wikileaks, er, leak, ‘I am sure that unidentified flying objects exist, otherwise it is impossible to explain the Nazca Lines in Peru, isn’t it?’

A Lithuanian bigwig even says that there is a, ‘Group of UFOs, who are making influence from the cosmos.’

But these would be small potatoes compared to what Wikileaks might have up its sleeve . . ..

WikiLeaks – Tis the Season to be Suspicious