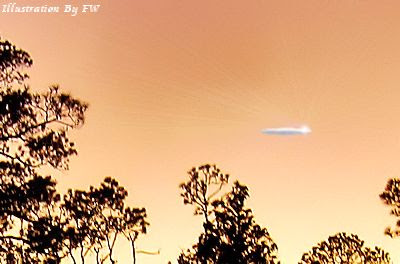 A Canadian witness at Wyoming, Ontario, reported watching “an extremely long, silver, cigar-shaped” UFO about 4:30 p.m. on December 29, 2014, according to testimony in Case 62224 from the Mutual UFO Network (MUFON) witness reporting database.

The witness was outside in the backyard with a dog when the object was first noticed.

“It was definitely not a blimp,” the witness stated. “Too thin; longer than a Boeing 767-300; no lower ‘navigation basket/viewing’ area; extremely long, thin, cigar shape. No wings; no tail section; no sound and maintained level altitude and moderately slow speed.”

The witness described the object’s direction.

“Headed towards Sarnia, Ontario, but when it went into a white cloud, it did not come out of the other side of the cloud. It was silver and the sunlight reflected off of it.”

The witness was unable to photograph the object. . . .