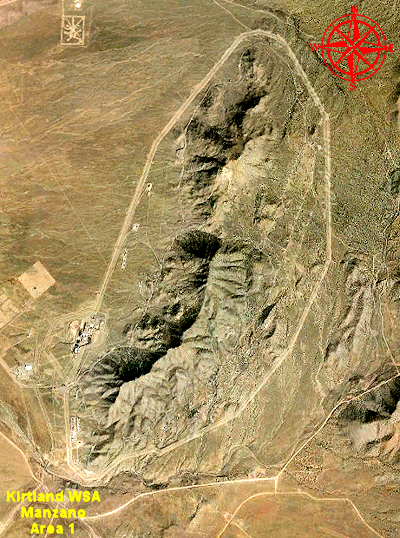 Those familiar with my work know that I research nuclear weapons-related UFO incidents. Over the past 41 years I have interviewed more than 150 U.S. military veterans regarding their involvement in such cases. Seven of those veterans participated in my 2010 “UFOs and Nukes” press conference in Washington D.C., which CNN streamed live. The full-length video of the event is below:

A brief summary of my latest interview follows here. In 1992, Brent Holsopple was a U.S. Air Force Security Policeman (SP) working at the Manzano nuclear Weapons Storage Area (WSA) located east of Kirtland Air Force Base, in Albuquerque, New Mexico. Activated in 1950 and designated Site Able, the facility was among the first atomic bomb depots to be created by the U.S. government in the years following World War II.

Renamed Manzano Base in 1952, the installation utilized a natural geological feature, popularly known as “Four Hills” to conceal atomic and later thermonuclear weapons in a series of hardened bunkers that burrowed directly into the flanks of the contiguous formation.

One night, probably in mid-April, Airman Holsopple was on patrol, together with three other SPs, riding in an extended-cab security vehicle on the road that runs parallel to the triple-security fence surrounding the bunker complex. He recently told me:

“As we traveled east, someone saw something in the sky and directed our attention to it. At first, I couldn’t see what he was pointing out, but after a few seconds, I saw a dark object southeast or maybe south-southeast of the base and slowly moving toward it. As it approached, it lost altitude and eventually its shape was visible. There was a moon out, not full, but the sky was bright enough so that you could see it was a triangular craft. No lights on it—just a dark object moving, slowing down, and getting closer to the ground.

Then it stopped in mid-air! That got my attention. We were all talking at once, you know, ‘Do you see that?!’, ‘What is that?!’, and so on. We couldn’t believe what we were seeing.

By now, we had stopped the vehicle and were just sitting there, watching this thing. We realized that it was no airplane or helicopter and started speculating about it being a UFO. Then, after 15 or 20 seconds, the object began moving slowly, made a turn to the southwest, and flew out of sight.

All this time, we hadn’t called it in. No one got on the radio and said, ‘Hey, we’re looking at a UFO.’ We were operating under PRP (Personnel Reliability Program). Basically, if you guarded nuclear weapons, your behavior was closely monitored. We knew that if we said we were seeing a UFO, our mental state would be questioned and our jobs might be in jeopardy.

We were still sitting there, discussing what we should do, when another vehicle approached us from the east. It stopped next to us, probably to try to figure out why we weren’t moving. One of the guys knew the Tech Sergeant who was driving and said to us, ‘I am going to tell him what we saw.’ The sergeant was alone. He was a good guy, someone we respected, and we thought it would be safe to mention it to him.

He had been at Manzano for 10 or 11 years and I was hoping that he might know what the object was. You know, maybe that kind of thing had been sighted before. There are a lot of test facilities south of Kirtland [AFB] and I thought that maybe it was some kind of experimental aircraft.

Anyway, as soon as we told him what we saw, he got kind of excited and said not to mention it to anyone; not to report it. He mentioned PRP and made it clear to us that we would be in big trouble if we called it in and told everyone that we had seen a UFO. So, we didn’t.

I asked Holsopple if he and the other SPs had later talked about the sighting among themselves. He responded, “Maybe, once or twice, when no one else was around.” Then he said, “But the longer I was at Manzano, the more I heard stories of strange things going on, strange things being seen in the sky. Not just recent sightings but incidents that went back to the 1940s, stories that were still being discussed among the security [guards] at the base.”

Holsopple said that he had more or less forgotten about his experience until he read an article about my research at the Open Minds website, in which I asked Air Force veterans to contact me if they had been involved in a nuclear weapons-related UFO sighting.