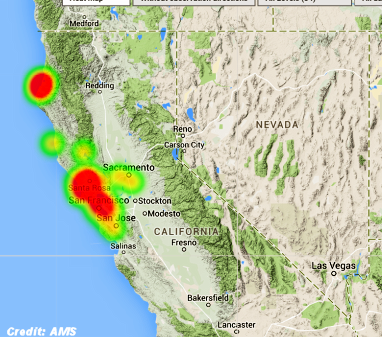 SAN FRANCISCO (CBS SF) — What appears to be a meteor blazed over the North Bay midday Saturday creating a frenzy of excited tweets and blog posts, and triggering calls to 9-1-1 dispatchers reporting what looked like a possible aircraft going down.

The space rock was actually the second fireball to light up Northern California skies Saturday — the first being the Delta II rocket from Vandenberg Air Force Base that left an upper atmosphere trail of exhaust lit up by sun.

The American Meteor Society tracked 34 reports of the fireball, all coming in after noon from across the Bay Area, and even as far north as Eureka.

An observer from Lafayette tells the society, “This object was moving very fast at a very steep trajectory. It was intensely clear, and the colors were very obvious. Shiny chrome was definitely part of the ball, as if sunlight were reflecting off of it. . . .