I am submitting the attached photos because I unknowingly captured an odd looking object in the sky when photographing a bird. I was taking pictures at the Merritt Island National Wildlife Refuge outside Titusville, FL with two friends. Ordinarily I wouldn’t take a picture of a bird this far away but my friend loves kingfishers and he said he can never seem to get close to one, so we better get one while we can. 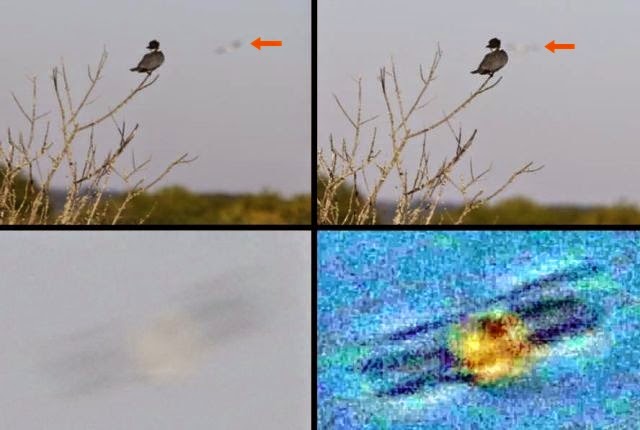 None of us saw anything at the time. When I was reviewing my photos later that day, I saw this odd artifact in two photos taken a second apart. The camera was set on slow continuous shoot.

These were taken with a Canon DSLR D70 camera with a 100-400mm zoom lens with a UV filter. I think the camera was pointed due south. The anomaly is just to the right of the bird’s right shoulder. The images have not been altered in any way. 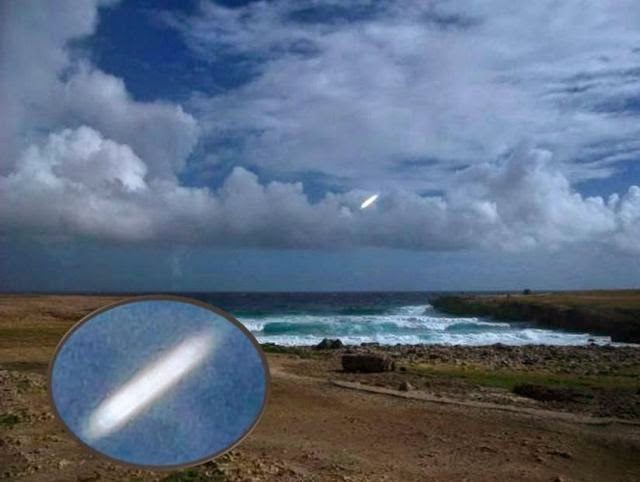 My mom went on vacation and she loves taking pictures. It wasn’t until she had gotten home from vacation and she was showing me her pictures like she always does when we noticed a bright cigar shaped light in front of the clouds, she had no idea what she had taken a picture of.

We know its not the moon or any craft that we have ever seen. When you zoom in all the way you can notice an additional way smaller object but could b anything, but the first object is just weird. 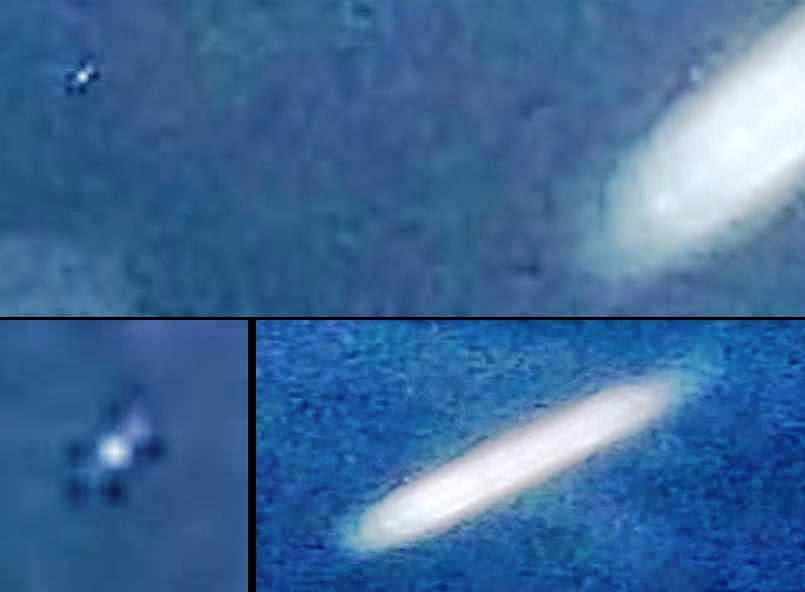 I don’t know if this is a real UFO but it’s something that I cannot come up with a reasonable explanation for, and its clearly NOT the moon because its’ in front of the clouds.

Between 5:00 a.m. and 5:15 a.m. on January 27, 2015 I was working doing my rural paper route in Silerton TN. As I stopped at a stop sign I heard what sounded like a helicopter. This is not unusual. As things get pretty boring on my route I tend to notice things out of the ordinary. 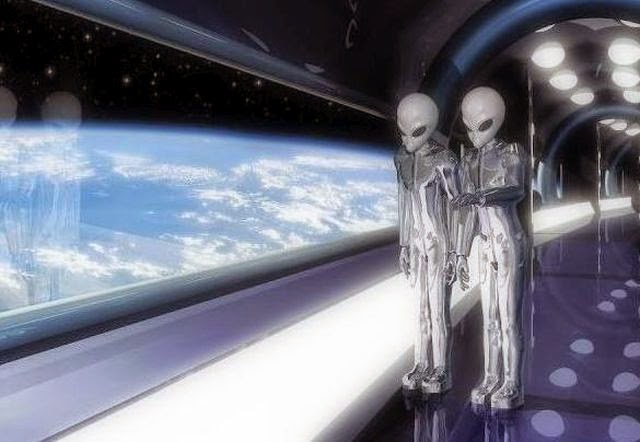 I sat for a about two minutes awaiting the helicopter as the sounds grew closer. I couldn’t find them in the sky so I continued on my route. About 4 miles I traveled when I caught sight of the helicopter over the tree line. I sped up around the corner to see if maybe an accident had happened I initially thought this was a medical helicopter. As I rounded the corner, I could see three obvious military helicopters. I am not an expert on aircraft nor have I served in the military. We have a National Guard armory in town so I am well versed in the site of military craft. I figured that’s all it was. So I continued working.

At approximately 6:15 a.m. I came to a wide open 3 Mile straight away on my route. I always look at the stars at this point on my route. As I looked to the north I noticed something completely unusual, two stars in the sky brighter than Venus and they appeared to be traveling closer together as they were on opposite sides of the road. Initially I thought it could be a brain matrix as sometimes when you travel stationary objects appear to move, and there were two slight curves in the road.

As I got to the straight away I tried to pay better attention to the lights to figure out why they were so bright. My first thought was perhaps they were landing lights of planes. Instantly I knew this was not the case as I see dozens of these every night. My focus went back to determining if they were stationary object or not. They appeared to still be traveling as both object were now in my windshield and I was traveling straight. I came to a complete stop to rule out anything I may be doing to cause these objects to appear to be moving.

They continued to head towards one another until they crossed paths. Completely confused on what I was seeing I decided to something and I have no idea why I did this. I use very bright Hid lights colored pink. As this is a very open area and very secluded with little to no population I figured if I could see them perhaps they can see me. I flashed my lights in a distinct order two times fast and a pause for about half a second then flashed a second time. I shifted to drive and was about to continue forward. When on a dime both object stopped without slowing down.

As soon as this happened my heart sank and my face becomes numb and flush with panic. I froze in place and could not think fast enough what to do next. The object on the right blinked then the object on the left blinked then together they blinked about half a second later. In the exact sequence I flashed my lights in. I immediately sped to the next drive way. I felt as if I needed to hide. I pulled into a driveway and parked where the trees blocked my view of the object that was on the right.

I sat for a few seconds and grabbed my phone I wanted to text my wife and just tell her what was going on I looked at my phone and watched the battery go from 92% to 0 and shut off. I was listening to the radio station 107.7 the Bob and Sheri show was on. And the station completely went out. I hit the scan button on my radio and could not pick up a single station. The static in the station began to pulsate in the same sequence I flashed my lights.

A minute or two had past at this point and my only thought was to drive home I didn’t even finish my route I didn’t want to continue north bound and see the objects. As I looked out of my window the object was now hovering just above the trees where I could see it. This felt intentional to me. I sped off southbound trying to get home. I could not see the objects in my rear view mirror. And felt relived.

I was now on a road surrounded by trees on all sides. I noticed at this point it was a very cloudy sky usually the sun would be coming out at this point no stars in the sky. I could now see through the trees as I was driving one object was following me southbound. As I came to another clearing I noticed the object seemed further away but was not traveling away from me but in the same direction I then noticed that the objects were actually stacked on top of each other.

And we’re flashing what I can only describe as a beam. It appeared to look like when you shine a flashlight in the sky at night when some fog is present. The beam didn’t come all the way down to the ground it appeared to only travel a short distance from the objects. They were shinning this light in all directions. I tried to slow down as I slowed the objects slowed. I turned East onto Montezuma Rd. The objects for a moment were behind me I turned off to hwy 100 e heading toward Henderson tn.

And the objects were now on my right hand side as if they just appeared there. I was becoming more and more scared at this point and decided to take a back road so that I was at least in a more populated area surround by more tree cover.

As I turned north bound Wilson school Rd. After about a mile I entered into tree cover I noticed a school bus in front me and felt safer for some reason. As I looked to the sky I could not see the objects any more. I continued on this road for another two miles and turned East on Sanford Rd. As I looked out my window I could see the object again through the trees.

Still no radio stations. I was at almost the exact spot I saw the helicopters earlier and as soon as I noticed where I was at two helicopters flying about 150 feet above the tree lines headed in the direction of the craft. The radio made the static sound again in the same sequence and it popped back on.

I could no longer see the craft. I reached down for my phone and pressed the power button and it booted up. Battery was 92% but my clock was in Eastern time-zone. After about a minute I changed back to Central time. This was without a doubt the most bizarre thing to ever happen to me. I don’t feel comfortable even discussing this with my wife. I’m actually terrified to go back to work tomorrow. Note: The above image is a rendering.

I was driving east on I-12 when I noticed a small airplane making a very sharp turn at low altitude. When I looked for the plane a second time, I noticed a chrome object in the sky stationary about 1,000 ft. above the next interstate exit.

This took place at 4:00 pm. The skies clear on January 24th, 2015. I called the national Weather service in Slidell, just 15 miles from the sighting to see if they were doing anything that might explain what I saw.

I also contacted local airports to see if any pilots reported a sighting, and also called the New Orleans International Airport to see if they could validate the sighting on radar. The FAA has not returned my call as of 1/28/2015.

I understand the principals of lift and airfoils. This was not a plane or a weather balloon. It defied gravity without wings or noise from engines. I have tried my best to explain this but so far it remains a UFO! Note: The above image is a rendering.