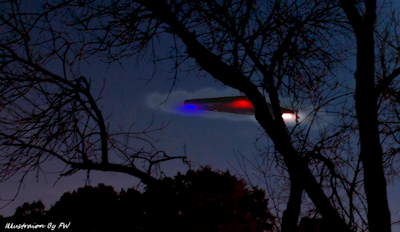 The witness was driving westbound along Spring Valley Boulevard at 6:50 p.m. on January 27, 2015, when the object was noticed “just under the cloud cover.”

“I observed a very large, black triangular object with flashing red, white and blue lights,” the witness stated. “It was moving at a very high speed and was not making the sounds that a low flying airplane would.”

The witness had trouble keeping the object in view.

“I kept losing it among tall trees and houses, but I did follow it long enough (and saw it enough times) to see it make a sharp turn downward and to the left, all the while its lights flashing brightly and appearing to alternate in color from red to white to blue.”

The witness was still looking for the object when he reached his destination.

“I parked in front of my house and ran from my car just as the craft disappeared from view above and behind the trees of the Bonnie Brae School. . . .