A mummified monk found in the lotus position in Mongolia is ‘not dead’ and is instead one stage away from becoming a real-life Buddha, it has been claimed.

Forensic examinations are under way on the amazing remains, which are believed to be around 200 years old, having been preserved in animal skin reports the Siberiantimes. 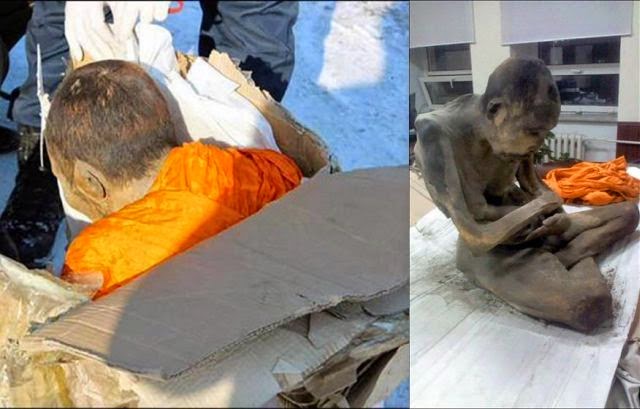 But one expert has insisted the human relic is actually in ‘very deep meditation’ and in a rare and very special spiritual state known as ‘tukdam’.

Dr Barry Kerzin, a famous Buddhist monk and a physician to the Dalai Lama, said: ‘I had the privilege to take care of some meditators who were in a tukdam state.

He added: ‘If the meditator can continue to stay in this meditative state, he can become a Buddha. Reaching such a high spiritual level the meditator will also help others, and all the people around will feel a deep sense of joy’.

Ganhugiyn Purevbata, who is the founder and professor of the Mongolian Institute of Buddhist Art at Ulaanbaatar Buddhist University, said: ‘Lama is sitting in the lotus position vajra, the left hand is opened, and the right hand symbolizes of the preaching Sutra. ‘This is a sign that the Lama is not dead, but is in a very deep meditation according to the ancient tradition of Buddhist lamas’.