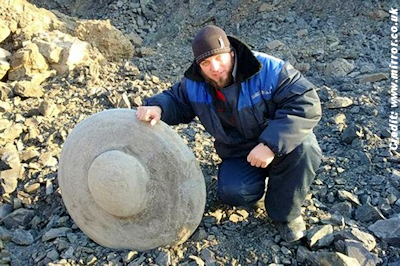 Do these intriguing images show a UFO that fell to Planet Earth from outer space thousands of years ago, embedding itself deep in the ground?

The bizarre flying saucer-shaped object was dug up during excavation work by a coal mining company in Siberia’s Kuznetsk Basin, Russia.

Archaeologists, were called in to examine the ‘craft’, which the excavators believe is a man-made object, describing it as a “mystery”.

However, sky-watchers are convinced it fell from space.

The unusual object is almost perfectly circular, with a diameter of around 1.2 metres and weighing roughly 440lbs – that’s 31 stone.

Excavator Boris Glazkov, 40, who found the object, said: “I have to say it wasn’t hard to see as it was really distinctive and large.

“I’ve never seen anything like this object, which is obviously man-made out, here in the middle of nowhere before. It is a real mystery.” . . .