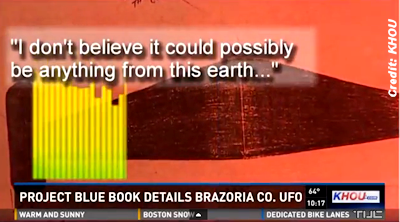 HOUSTON – On the back roads of Brazoria County, somewhere between Damon and West Columbia along Highway 36, they still talk about a pair of purple and blue lights.

McCoy’s son Kevin was eight years old at the time.

“I remember the excitement,” he said. “Dad said what he remembered more than anything is he said it just absolutely scared the hell out of them.”

The story, heavily detailed in Brazoria County lore but also in government documents, goes something like this. It was 11 p.m. The deputies were driving from Damon to West Columbia together in a Brazoria patrol interceptor. They saw mysterious blue and purple lights on the horizon. The lights eventually grew so close and so intense they filled the inside of their squad car. And they swore they saw some form of spaceship a football field long. Both men would eventually draw almost identical sketches of the object for investigators to see.

“They were just scared to death whenever this thing came and they were screaming, go, go get out of here,” said Kevin McCoy who said his dad was absolutely convinced what he saw was real.

“He firmly from the time he saw it to the day he died it was real, no doubt,” said McCoy.