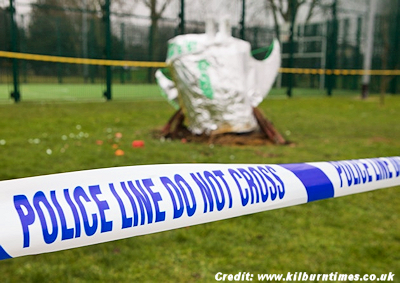 Pupils at St Mary’s CofE Primary school in Garnet Road, Neasden, were stunned to come to school on Monday morning to see an Unidentified Flying Object (UFO) had crashed in their playground.

The silver ship landed on a patch of grass and was surrounded with mud as smoke billowed out from its sides with what looked like lava bricks thrown aside.

Two police officers at the scene had cordoned off the area telling children to keep a note of what occurred over the week to help them with their investigations.

Nic’Kyle Appiah, 8, said: “Maybe it came from the Solar System. The police told us to write a report and they’ll come back to investigate.” . . .